An unreleased Prince concert film and a documentary about the making of the film could be heading exclusively to Apple Music, according to sources close to the Prince estate (via Billboard). The late singer's estate is said to be shopping around the rights to the concert film and doc to a variety of streaming services, namely including Apple Music and Spotify.

The agreement for the two films is said to potentially be a "multi-million dollar deal" thanks to the rarity of the footage. The concert film covers Prince's August 3, 1983 show in Minneapolis, at which time he debuted numerous songs for the first time from the soundtrack to Purple Rain, which released in theaters the year after in 1984. The footage is said to be exhaustive enough that the winning streaming service could use it to create and produce a documentary about the making of the concert film.

Image via Billboard
Helping to negotiate terms of the deal is Troy Carter, an executive from Spotify and advisor to the Prince estate, but the sources believe that Spotify "isn't likely" to become the exclusive home of the Prince films.


The lucky streaming service isn’t likely to be Carter’s employer, though: the estate is talking to a range of Spotify’s rivals including Apple Music, sources say.

The storied show at Minneapolis’s First Avenue nightclub was a surprise gig billed as a benefit for the Minnesota Dance Theatre, with a set list that included “Let’s Go Crazy” and “Purple Rain.”

Demand for Prince's robust back catalogue of songs has increased following the artist's death in April of 2016, and this past February his music became available to stream on Apple Music, as well as services like Spotify, Google Play Music, and Pandora. Prince's music was previously exclusive to Tidal after he pulled all of his tracks from everything but the Jay Z-owned service in July of 2015.

If Apple acquired rights to Prince's unreleased concert footage, the late artist's films would be the newest in a line of exclusive music documentaries that Apple Music has acquired over the past few years. In the first year of Apple's music streaming service, it launched Taylor Swift's 1989 World Tour LIVE film, and last month announced that Sean "Puff Daddy" Combs' documentary Can't Stop, Won't Stop will be hitting Apple Music this June.

venusboy
I hate exclusive content deals. Consumers lose out... we can't all have an account with every provider.

How about competing on quality of service, and better usability??
Score: 10 Votes (Like | Disagree)

Vjosullivan
That news represents everything that is bad about the centralised control and distribution of music.
Score: 8 Votes (Like | Disagree)

Rogifan
That would be funny considering he never gave Apple the time of day when he was alive. I remember he posted this to Twitter when his last Album dropped on iTunes in 2015 (and it was the only album of his on Apple Music while he was alive). 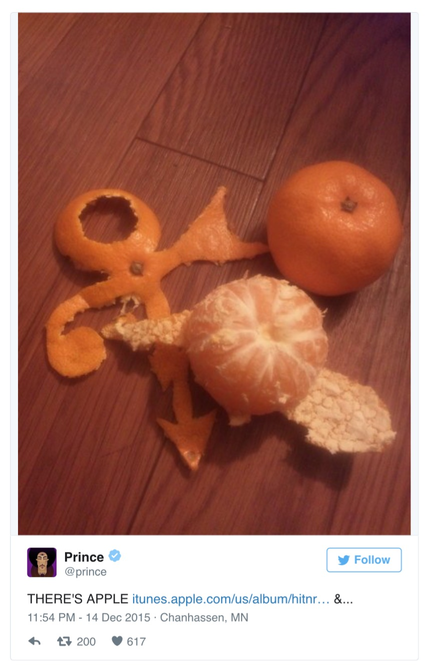 If Apple acquired rights to Prince's unreleased concert footage, the late artist's films would be the newest in a line of exclusive music documentaries that Apple Music has acquired over the past few years. In the first year of Apple's music streaming service, it launched Taylor Swift's 1989 World Tour LIVE ('https://www.macrumors.com/2015/12/13/taylor-swifts-1989-apple-music-exclusive/') film, and last month announced that Sean "Puff Daddy" Combs' documentary Can't Stop, Won't Stop ('https://www.macrumors.com/2017/04/27/sean-combs-documentary-apple-music/') will be hitting Apple Music this June.

Prince is so much better than Taylor Swift or Puff daddy, it's not even in the same class.
Score: 4 Votes (Like | Disagree)

BuffaloTF
I don't care who gets this. Will purchase. The concert sequences in the film and the full length concert film Sign O' The Times are phenomenal. Prince was such an awesome live event.
Score: 4 Votes (Like | Disagree)

GermanSuplex
With all due respect: Drake? Nah. Beyoncé? Nah. Prince, this.... HELL YEAH! I just hope it can be purchased for keeps as well.
Score: 2 Votes (Like | Disagree)
Read All Comments