In the wake of Jimmy Iovine detailing Apple Music's ongoing efforts to become "an overall movement in popular culture," today Sean Combs -- aka Puff Daddy -- announced that his new documentary Can't Stop, Won't Stop: A Bad Boy Story is coming exclusively to Apple Music on June 25 (via Billboard). The announcement comes after the documentary's premiere at the TriBeCa Film Festival yesterday.

Can't Stop, Won't Stop documents the rise of Combs and his record label throughout the 1990s, and extends to the process Combs went through when he put together the 20th anniversary Bad Boy reunion show tour in 2016. The partnership with Apple Music began when Iovine attended one of those shows. 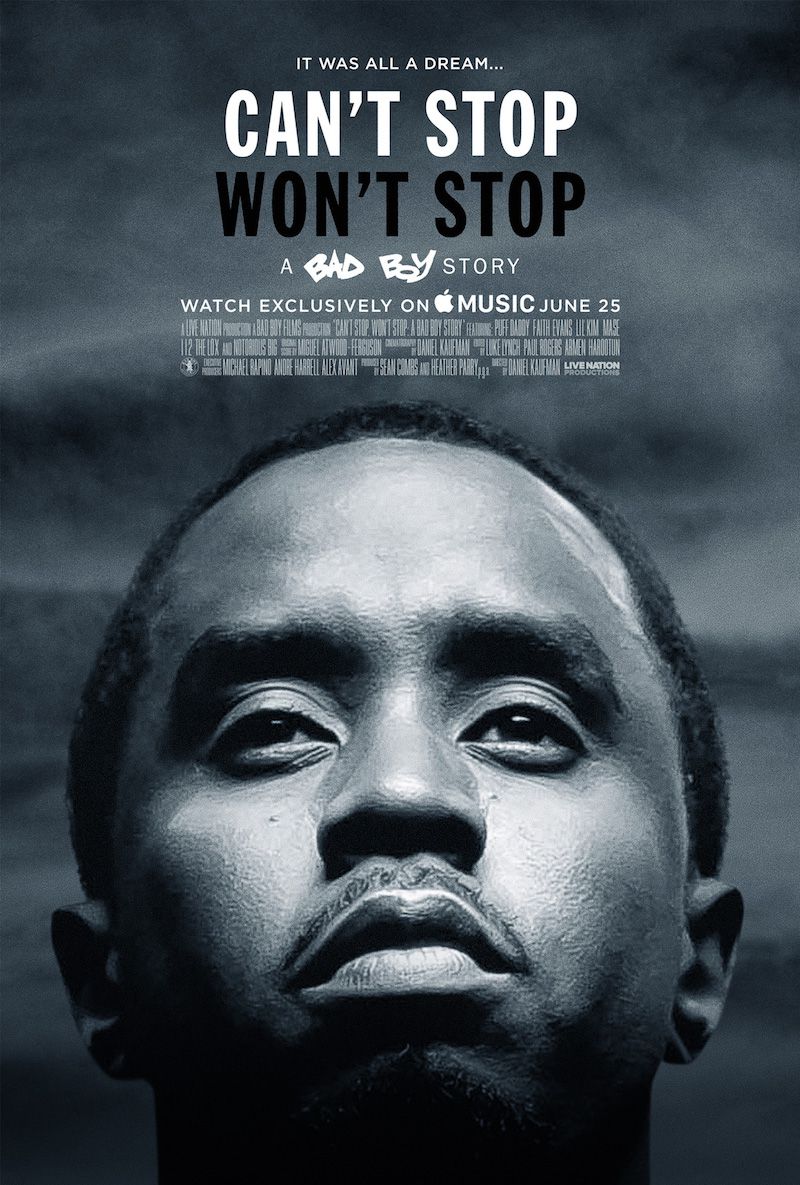 "I went to the [Bad Boy Reuion] concert and thought it was incredible," Jimmy Iovine, Apple Music chairman and CEO, tells Billboard. "I think Puff and Bad Boy's story is incredible and one that a lot of people can relate to in any genre or in any business. His story is powerful. He really overcame a lot to get to where he's at today and the documentary shows that."

Apple Music is said to have exclusive rights to the documentary for at least one year. According to Combs himself, he feels "blessed" to be working with Apple to show the impact that the Bad Boys have had on fans throughout the years, including the death of Notorious B.I.G.

“I knew this was a story that should be shared with the world," Diddy said in a statement "Heather Parry and Live Nation Productions, and Director Daniel Kaufman, helped create this very special documentary. Now I'm blessed to also be working with Apple to showcase the film and share Bad Boy's history and impact with fans. The support Live Nation, Apple and everyone on the team has given to this project is a true testament to the Bad Boy legacy."

In his interview with Billboard today, Iovine detailed near-term plans for Apple Music that would focus on original video content with music-related themes, a category that Combs' Can't Stop, Won't Stop fits right into. Brad Paisley also just announced a "visual album" coming as a timed exclusive to Apple Music tomorrow, April 28. Further down the line, Apple Music subscribers will have access to a much wider variety of shows, which might even include content from J.J. Abrams.

How about "Please Stop"?
Rating: 20 Votes

Are you being sarcastic? He is the one that coined the phrase before Taylor was even a star. You have to be kidding.
Rating: 6 Votes

OldSchoolMacGuy
Sweet, a documentary about someone who isn't really relevant anymore.
Rating: 5 Votes

Wait a minute. The title comes from a slogan/catch phrase Combs used on numerous tracks in the 90s. Don't give Swift (or anyone else) credit for creating things that they did not.
------
I'm not the biggest fan of Sean Combs but I might check this out; it could end up being pretty interesting since Bad Boy was one of the biggest labels in the commercial advent of hip hop.
Rating: 5 Votes

Robert.Walter
What market is Apple trying to access ?
Rating: 5 Votes

Kevin Barre
To be watched by literally dozens of viewers.
Rating: 4 Votes

hahaha! who wants to see this!

they're really dropping the ball here.

They should have invested in E-sports, it's the perfect timing to disrupt that market by a big player like Apple.

He was using that phrase in his music back in the 90s when Swift was just a baby.
Rating: 3 Votes

Apple's target market is people who actually leave their houses.