Just one week after releasing iOS 10.3, a major update that included Apple Filesystem and Find My AirPods, Apple has released iOS 10.3.1, which appears to be a minor update to address bugs and other issues that have popped up since the release of iOS 10.3. 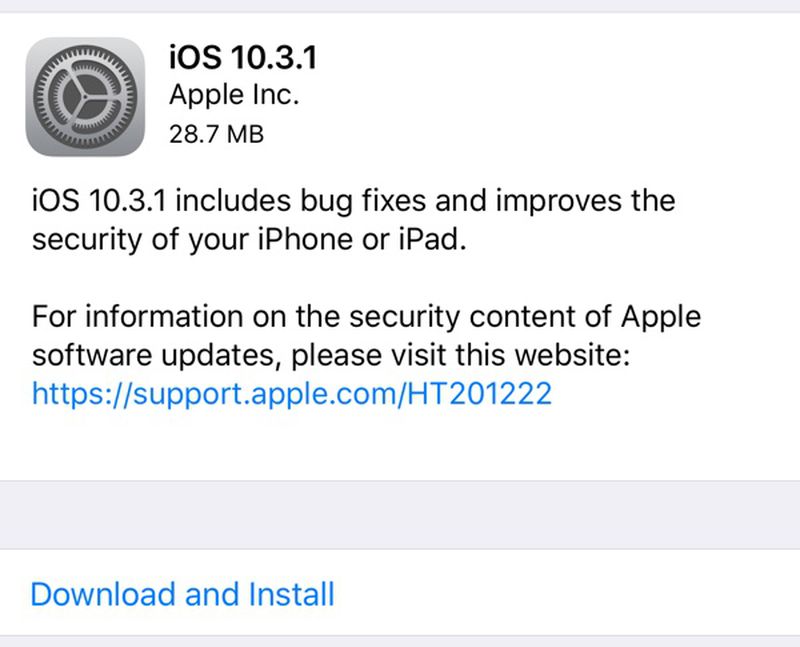 iOS 10.3.1 is available as a free over-the-air update for all iOS 10 users, and it can also be downloaded via iTunes.

According to Apple's release notes, iOS 10.3.1 includes bug fixes and improves the security of your iPhone or iPad, and a security document suggests it fixes a Wi-Fi-related vulnerability. The release notes do not go into more detail about what bug fixes might be bundled into this release, so we'll update this post if and when we learn more about the content of the iOS 10.3.1 update.

Orionis
Coming from an android device (S7 edge) this is cray cray. So many updates and they are available instantly!
Score: 39 Votes (Like | Disagree)

I hate when updates don't have specifics on what they are fixing/changing. The worst offender is Facebook who never mentions anything beyond "we push updates periodically to fix things" ....ya, no duh, Facebook.

busyscott
I hate when updates don't have specifics on what they are fixing/changing. The worst offender is Facebook who never mentions anything beyond "we push updates periodically to fix things" ....ya, no duh, Facebook.
Score: 21 Votes (Like | Disagree)

I'm concerned in updating because I saw an article saying that 10.3.2 will remove support for 32 bit apps. Are 32 bit apps working in 10.3.1?
I may be forced to upgrade to an iPhone 7 now just so I can remain on 10.3.0. I have some 32 bit apps that are a must because I live in a remote area without internet and my apps allow me to download Apple updates onto the phone first and then transfer them to the computer via iTunes.

I mean its only a matter of time until 32bit was no longer going to be supported. It was believed it was going to be iOS 11, but I guess Apple wanted to get it done with sooner. Eventually you will have to upgrade your OS or your device so you will lose access to those apps. I have plenty of 32bit apps as well, but unless the developer decides to update them, we are stuck. I will be updating to 10.3.2 though.

Coming from an android device (S7 edge) this is cray cray. So many updates and they are available instantly!

Don't count on it. These are minor bug fixes, only 25MB, hardly enough to fix a battery issue if there was one. Its also possible you just had a bad install. I have had zero issues with battery life on 10.3 on my 7Plus or Air 2.

Well, a battery issue could potentially be fixed with an update in only a few kilobytes, if the issue is a question of a coding error...
Score: 11 Votes (Like | Disagree)

C DM
It'd be interesting to know exactly what has been fixed/changed. It sounds like at least some security items, but I guess we'll see.
Score: 8 Votes (Like | Disagree)
Read All Comments

Tuesday March 31, 2020 10:22 am PDT by Juli Clover
Apple has acquired weather app Dark Sky, Dark Sky's developers announced today. Dark Sky is one of the most popular weather apps on the App Store, known for its accuracy and storm warnings. Our goal has always been to provide the world with the best weather information possible, to help as many people as we can stay dry and safe, and to do so in a way that respects your privacy. There is no ...
Read Full Article • 205 comments