Apple took down its online store early this morning as the company prepares to launch its special edition (PRODUCT)RED iPhone 7 and iPhone 7 Plus in more than 40 countries and regions around the world. 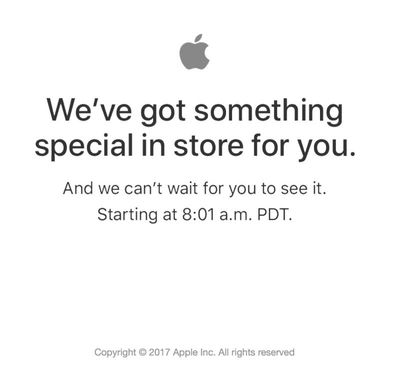 Internet users attempting to access the store section of the U.S. site are being met with the familiar "We've got something special in store for you" placeholder, accompanied by a relaunch time of 8:01 a.m. Pacific Time, which is when Apple previously said it would officially be launching the new red colorway iPhone.

Today Apple is also launching a new lower priced 9.7-inch iPad to replace the iPad Air 2, as well as new storage tier options for the iPhone SE and the iPad mini 4.

The PRODUCT(RED) iPhone 7 will be available in 128GB and 256GB storage capacities for the same $749/$849 and $869/$969 prices as the equivalent iPhone 7 and iPhone 7 Plus models in standard colors. The anodized aluminum's vibrant red finish has a white Apple logo and white front bezels.

The new 32GB and 128GB storage capacities for the iPhone SE will cost $399 and $499 respectively, replacing the original 16GB ($399) and 64GB ($449) storage capacities. All other specs for the smaller profile handset remain the same.

The new 128GB model iPad mini 4 with Wi-Fi will start at $399, which was previously the price for the 32GB model with Wi-Fi, which has been discontinued. A cellular model with 128GB of storage will also be available for $529.

Despite the unusually early shuttering of the store, it's very unlikely that it relates to anything other than updates to the online ordering process to reflect the new products, but we'll keep readers updated as soon as we learn more.

bobjonesco
Taking the store down for 6 hours just to add two products we already knew about?
Score: 40 Votes (Like | Disagree)

It's actually more than two products aside from the new 9.7 iPad and the Product Red iPhone. It also includes added Watch bands, iPhone SE, and additional iPhone cases.

Not to mention any other unforeseen edits/changes that you're not aware of.

Amazon adds tons of new stuff every single day and their site manages to stay up and running.
Score: 35 Votes (Like | Disagree)

Actually the new watch bands and cases were already available to buy when the store was updated on Tuesday.

I get that the store has to go down, but 6 hours is strange.

Amazon, ESPN, CNN, Fox News (name just about ANY other site) They ALL update a TON of stuff on their pages constantly and never go down because of those updates.

Any technical argument why the largest TECH company in the world has to go down at all, let alone 6 HOURS to update a handful of items is completely daft.
Score: 18 Votes (Like | Disagree)


Apple took down its online store early this morning as the company prepares to launch its special edition ('https://www.macrumors.com/2017/03/21/apple-announces-iphone-7-productred-special-edition/') (PRODUCT)RED iPhone 7 and iPhone 7 Plus in more than 40 countries around the world. 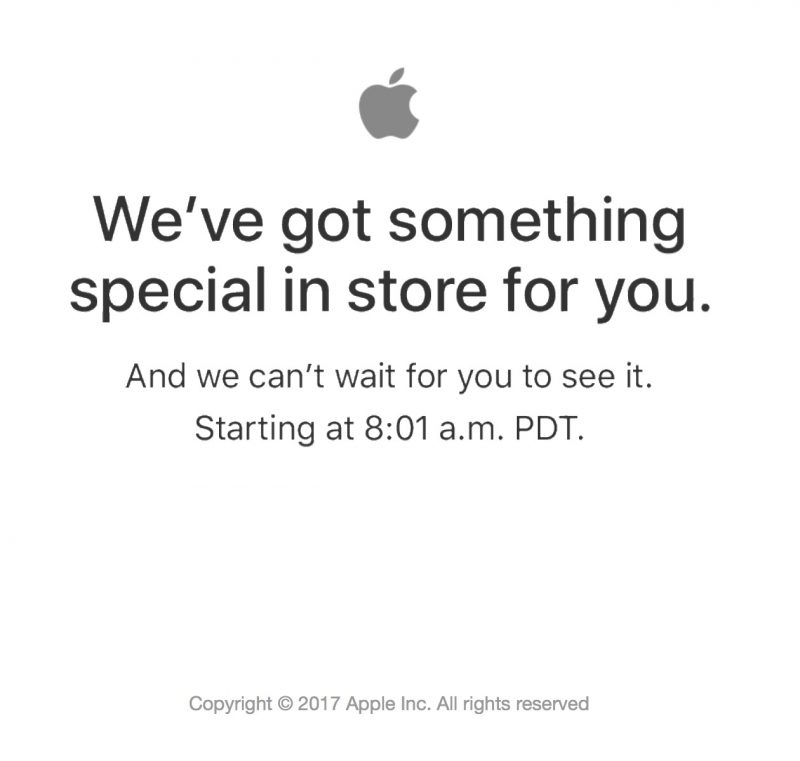 Internet users attempting to access the store section of the site are being met with the familiar "We've got something special in store for you" placeholder, accompanied by a relaunch time of 8:01 a.m. PDT, which is when Apple previously said it would officially be launching the new red colorway iPhone.

PRODUCT(RED) models will be available in 128GB and 256GB storage capacities for the same $749/$849 and $869/$969 prices as the equivalent iPhone 7 and iPhone 7 Plus models in standard colors. The anodized aluminum's vibrant red finish has a white Apple logo and white front bezels.

It's unlikely that the message relates to anything other than last minute changes to the iPhone 7 online ordering process, but we'll keep readers updated as soon as we learn more.

[doublepost=1490348421][/doublepost]I don't get it. Why one of the largest technology company needs to shut down its online store to update something?
Score: 16 Votes (Like | Disagree)

It has nothing to do with knowing about the products, they close the site to make alterations to the website reflecting the newest product updates. This isn't anything new.

6 hours. I'm sure Apple has an army of people who manage the website. 2 products. The changes are probably already on a staging or dev server and all they'd need to do is push the new pages out.
Score: 13 Votes (Like | Disagree)

wbrat
I don't get it. They already made changes to the store few days ago...