Apple Tops Holiday Sales With 44% of All New Device Activations

Apple's iPhone and iPad were the most popular mobile devices gifted during the holidays this year, according to new data shared by Yahoo-owned mobile analytics firm Flurry.

Flurry examined device activations by manufacturer between 12/19 and 12/25, finding Apple devices to be twice as popular as Samsung devices. 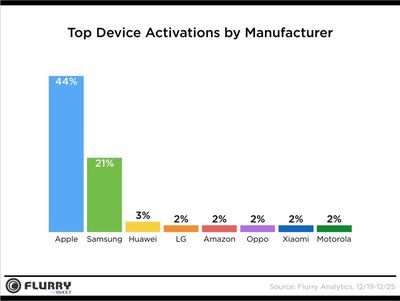 While Samsung is slowly growing in popularity throughout the holiday season, up 1% from last year, Apple devices continue to be the gift to give. Holding the third and fourth positions for activations are Huawei and LG; which is remarkable, as both manufacturers do not have an individual device within the top 35 devices activated. Their high rank is likely due to the fact that they have wide variety of devices and affordable options (hundreds of phablet and medium phones) for consumers to choose from.

Google's Pixel smartphone, which came out in October, did not make Flurry's list.

Last year, Flurry released a similar report, and Apple devices made up 49.1 percent of all device activations, while Samsung devices came in at 19.8 percent.

Phablets, or smartphones and tablets ranging in size from 5 inches to 6.9 inches, continued to grow in popularity. In 2016, the phablets category, which includes the 5.5-inch iPhone 6 Plus, 6s Plus, and 7 Plus, was responsible for 37 percent of total device activations. Medium-sized phones, like the 4.7-inch iPhone 6, iPhone 6s, and iPhone 7, were responsible for 45 percent of all activations. Activations of full-sized tablets, like the iPad, have continued to wane.

To gather its data, Flurry measured smart device activations and app downloads from the hundreds of thousands of apps it tracks from December 19 to December 25.

az431
Based on this it's pretty clear that Tim Cook must be fired immediately as Apple is colossal failure on a global scale.
Score: 10 Votes (Like | Disagree)

anzio
Very cool. Oh and it looks like Samsung is still on fire compared to the other manufacturers.
Score: 8 Votes (Like | Disagree)

DakotaGuy
Now we see why they have little interest in Macs and especially desktop Macs these days. The iPhone and iPad is all Apple needs anymore. They have amazing profit margins and they can sell on brand name alone. The Macs can't do that anymore. The expense to try and compete in the PC market isn't worth the effort when you can sell iDevices in huge volumes with little effort.
Score: 6 Votes (Like | Disagree)

Based on this it's pretty clear that Tim Cook must be fired immediately as Apple is colossal failure on a global scale.

Do not misrepresent the argument. People who say that usually do not say it because Apple will not be doing well financially or as a company. Lots of other companies do well, regardless whether people lament the quality of their products. This analysis actually reinforces the belief that Apple is becoming too dependent upon the iPhone and gives them more reason to neglect other products. Apple has become a different company under Cook, even though it is a healthy company. People who express the belief that Cook should be replaced usually say it because of this.

Bingo! Thank you. We fellow trollers were struggling with how to put a negative spin on this positive news and you saved the day! Bravo! Let me make sure I've got the theme we should be using to troll with: "These figures are just more evidence of Apple's decline. They produce such crummy products because they are heads and shoulders above their competition and consumers are buying their products in droves because they don't want to buy the competition's inferior products.. Apple is doomed. " How am I doing?
Score: 5 Votes (Like | Disagree)
Read All Comments