Popular accessory maker Twelve South has come out with a line of merchandise to promote the brand, ranging from T-shirts and cups to a candle that's been causing quite a stir on the Internet over the last couple of days.

Made from soy wax, Twelve South's candle promises to deliver a "New Mac" smell, as in the smell you get when you take a whiff of a freshly opened and unboxed MacBook Pro, MacBook Air, or other Mac product. 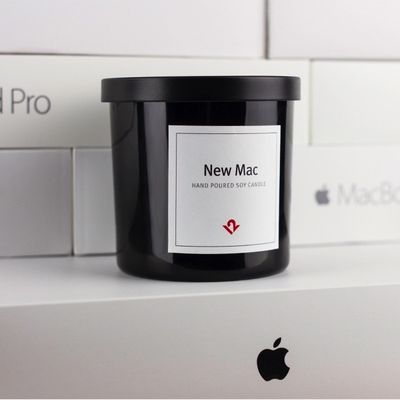 According to Twelve South, the "New Mac" candle features notes of mint, peach, basil, lavender, mandarin, and sage, which somehow magically combine to mimic the smell of a new Mac.

If you think you've seen everything, here's a new one... Ever open up a new Mac box and smell it? (or is that just us?) We took that scent - and literally bottled it. Meet the New Mac Soy Candle. No kidding. It's kind of awesome.

Twelve South is pricing its New Mac candle at $24, and it's been so popular with Apple enthusiasts that it's temporarily sold out. The company expects to have more available for purchase later this month.

ILuvEggplant
Lol I sent in this tip!
Score: 14 Votes (Like | Disagree)
Read All Comments