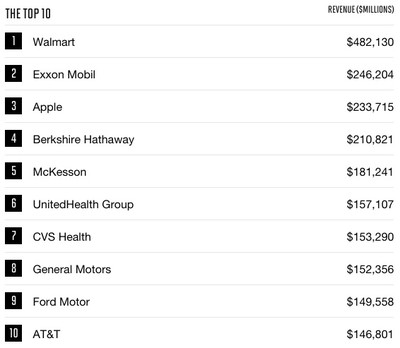 Apple's profile highlighted the company's recent slowdown in iPhone and iPad sales, push into India, and the much-rumored Apple Car.

After more than a decade of solid growth fueled first by the iPod music player and then by the even more popular iPhone, Apple finally appeared to hit a wall. Still the most profitable publicly-traded company in the world, Apple’s iPhone 6S and 6S Plus upgrades barely outsold their predecessors after arriving on the market at the end of 2015, while sales of the iPad tablet computer continued to shrink throughout the year. In April 2015, the Apple Watch arrived to mixed reviews and modest sales. And though debate raged for a bit about the state of Apple’s sales in China amid a slowing economy there — including an unusual August 2015 email from CEO Tim Cook to CNBC host Jim Cramer claiming no summer slowdown — the year ended on a weak note for the company in Asia. Lately, hopes have turned to the next iPhone upgrade cycle and a push to focus on India, where Apple’s market share remains miniscule. Still, even with the growing concerns, Apple’s next big leap came into view in 2015. Dubbed Project Titan and staffed with hordes of former car industry experts, Apple’s effort to leapfrog the automobile market with an electric masterpiece likely won’t reach consumers for a few more years. But when it does, Cook and company could be riding high again.

Apple's revenues topped $233.7 billion during the 2015 fiscal year, a 27.9 percent year-over-year increase. While Walmart and Exxon Mobil posted higher gross revenues of $482.1 billion and $246.2 billion respectively, note that Apple's annual profits of $53.4 billion were more than both companies earned combined.

maflynn
These numbers are all well and good for the wall street type folks, but for me as a consumer, I'd prefer seeing some innovation and some cool products. What I hope we DON'T see soon, is a thinner laptop, a thinner iPhone, a thinner watch, etc. Apple has shown itself that it can really make some great products, lets just give up on the thin design and make a design that will turn heads, but also function great.
Score: 18 Votes (Like | Disagree)

DanielSw
As a professional Apple user for over three decades, I think Apple is doing very well. I actually have no idea how many Apple computers I've owned and used daily over the years. But the current i7 27" iMac is the best overall (though I really would love to see an updated Mac Pro).

Just this morning I took my Honda CRV into the local dealer for its first oil change. I brought my 12" 2015 MacBook along so that I could continue working on our new website, built with Adobe Muse CC, while I waited. Using my iPhone 6S+ in personal hotspot mode on AT&T, I connected easily Back to My Mac, and it worked very well.

I love the newer MacBook with its thin form factor and beautiful screen. I think Apple's strategy of a "think client" is a good one. I don't need much local storage or RAM beyond its 8GB as long as I can connect with my iMac. I also can't remember the last time I made a CD or DVD.
Score: 8 Votes (Like | Disagree)

These numbers are all well and good for the wall street type folks, but for me as a consumer, I'd prefer seeing some innovation and some cool products. What I hope we DON'T see soon, is a thinner laptop, a thinner iPhone, a thinner watch, etc. Apple has shown itself that it can really make some great products, lets just give up on the thin design and make a design that will turn heads, but also function great.

Sorry to say but everything you DON'T want to see Apple make is everything Apple WILL make this year.
I think a lighter iPhone would be nice, and a thinner watch so long as the battery life isn't affected.
Score: 5 Votes (Like | Disagree)

2457282
So the slow down in phone sales that sent everyone into a tizzy still allowed them to increase revenue to become #3. Hmm..... maybe they are not as doomed as thought.
Score: 3 Votes (Like | Disagree)

These numbers are all well and good for the wall street type folks, but for me as a consumer, I'd prefer seeing some innovation and some cool products. What I hope we DON'T see soon, is a thinner laptop, a thinner iPhone, a thinner watch, etc. Apple has shown itself that it can really make some great products, lets just give up on the thin design and make a design that will turn heads, but also function great.

I see people say this on every Apple article, and I'm just curious.. what exactly do you expect them to do? The mobile wave is over, we reached peak smart phone years ago, and as such there will be nothing but refinement until the next breakthrough in technology.
Score: 3 Votes (Like | Disagree)
Read All Comments