After arriving in India from Beijing on late Tuesday night, Apple CEO Tim Cook started his five-day trip in the country with a pre-dawn visit to the famous Siddhivinayak Temple in Mumbai on Wednesday, according to The Indian Express. Cook was accompanied by newly promoted Apple India head Sanjay Kaul. 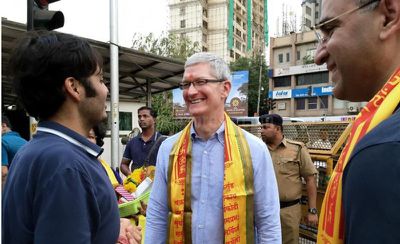 Local media reports claim that Cook also has plans to have dinner with Bollywood actor Shah Rukh Khan at his seaside home in Bandra, a suburb of Mumbai, and meet Chief Minister of Maharashtra Devendra Fadnavis.

Indian website Mid-Day reported that Cook will travel to Hyderabad, India on Thursday, where he is expected to formally announce a $25 million technology development center that will focus on Apple Maps development and house over 150 employees. The CEO is also expected to make stops in Bangalore and Delhi later this week.

Great to hear from some of India's top iOS developers today. Innovative apps and many ideas for the future! pic.twitter.com/ZhEfE7wNW7 — Tim Cook (@tim_cook) May 18, 2016

Cook is reportedly scheduled to meet India Prime Minister Narendra Modi on Saturday before wrapping up his visit. The conversation may center upon the Indian government's recent decisions to approve single-branded Apple Stores, which could open within 18 months, but deny the sale of refurbished iPhones in the country.

Apple's market share in price-sensitive India remains less than 2 percent, but Cook believes the country provides a "really great opportunity" for growth after sales in the U.S. and China have slowed. Apple's revenue grew 56 percent in India last quarter, passing the $1 billion mark for the first time.

radiology
Enjoy while it last, Tim. You won't last for too long as :apple: CEO. A few more strike outs and you are done.
Score: 16 Votes (Like | Disagree)

newdeal
Get your ship in order captain...your team isn't doing their jobs and it is showing in your software
Score: 14 Votes (Like | Disagree)

Let's see how MacRumors forum members spin this one negatively.

Internet forum for opinions no?
Score: 11 Votes (Like | Disagree)

NachoGrande
I'd be pretty nervous if I were an Apple Software Engineer.
Score: 11 Votes (Like | Disagree)

emm386
Reduced sales growth of Apple products in America, Europe and China. Rather than trying to solve the issue by coming out with more refined and properly tested Operating System software and new innovative hardware, they just move along by trying to push their products and services onto the Indian market...

At least most people in India are used to service outages. So no one will go crazy when things don't work from time to time like us... gotta love Tim!
Score: 10 Votes (Like | Disagree)
Read All Comments

Saturday February 4, 2023 10:05 am PST by Eric Slivka
Online retailer TigerDirect has slashed pricing on the M1 iPad Air in several colors, offering the base 64GB configuration for just $313.99 in Purple and Pink. Note: MacRumors is an affiliate partner with TigerDirect. When you click a link and make a purchase, we may receive a small payment, which helps us keep the site running. That's a savings of 48% compared to Apple's normal $599.00...
Read Full Article • 396 comments

Sunday February 5, 2023 6:07 am PST by Joe Rossignol
Apple has discussed selling a new top-of-the-line iPhone alongside the Pro and Pro Max models in 2024 at the earliest, according to Bloomberg's Mark Gurman. Based on this timeframe, the device would be part of the iPhone 16 lineup or later. In a September 2022 edition of his weekly "Power On" newsletter, Gurman said there was "potential" for an iPhone 15 Ultra to replace the iPhone 15 Pro...
Read Full Article • 410 comments