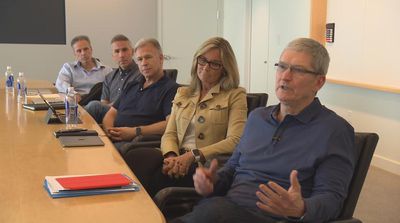 Watch "Inside Apple, Part One" (Image: CBS)
Apple CEO Tim Cook discussed a wide range of topics with Rose, starting with the legacy of co-founder Steve Jobs. "This is Steve's company," said Cook. "This is still Steve's company. It was born that way, it's still that way. And so his spirit I think will always be the DNA of this company."

Rose then accompanied Apple design chief Jony Ive for a rare look inside Apple's secretive design studio, where a team of 22 designers work on the future of Apple products. Apple covered many of the desks to ensure Rose could not see what the company is working on next.

Ive explained how he prototyped the Apple Watch, beginning with a sketch of the watch casing transformed into a 3-dimensional electronic blueprint sent to a high-precision CNC machine for milling. The watch casing is then sanded and polished by hand by veteran craftsmen at Apple.

Rose and Ive inside Apple's secretive design studio (Image: CBS)
The design chief also reflected on the complex engineering process that was required to create Apple's new 12-inch MacBook, including working with Apple's head of hardware engineering Dan Riccio to create the custom-shaped terraced battery that fits inside the notebook's ultra-thin enclosure.

The segment revealed that Apple senior director Graham Townsend leads a team of 800 engineers and specialists working on the iPhone's camera. Townsend showed Rose a micro suspension system that stabilizes the camera when its owner's hand shakes, and explained how Apple engineers calibrate the camera.

Graham Townsend: This whole sus-- autofocus motor here is suspended on four wires. And you'll see them coming in. And here we are. Four-- These are 40-micron wires, less than half a human hair's width. And that holds that whole suspension and moves it in X and Y. So that allows us to stabilize for the hand shake.

In the camera lab, engineers calibrate the camera to perform in any type of lighting.

Graham Townsend: Go to bright bright noon. And there you go. Sunset now. There you go. So, there's very different types of quality of lighting, from a morning, bright sunshine, for instance, the noonday light.

Rose then visited an unmarked warehouse off Apple's headquarters that contained a mock Apple Store based on the company's next-generation store design.

Charlie Rose: How many iterations of what I'm looking at have you gone through?

Angela Ahrendts: I mean, honestly there are meetings in here every single week. And there's a floor set. We use this as a stage, and we say, "This is rehearsal."

Ahrendts wants customers to be transfixed from the moment they walk through the doors.

Angela Ahrendts: The most important goal is, is that it is dynamic. People are used to living on their phone. So they're used to being dynamic, emotive, immersive. And so how do we make sure when they walk into a store they say, "Wow"?

The segment then shifted to Apple marketing chief Phil Schiller, who last week took over App Store leadership in an executive shakeup.

Schiller discussed how Apple products inherently cannibalize each other, with devices like the iPhone, iPad and Mac competing for your attention.

Charlie Rose: Is there danger of one product cannibalizing the other product?

The conversation then returned to Cook, who spoke about privacy and encryption.

Charlie Rose: In the government, they say it's like saying, you know, you have a search warrant, but you can't unlock the trunk.

Tim Cook: Here's the situation is on your smartphone today, on your iPhone, there's likely health information, there's financial information. There are intimate conversations with your family, or your co-workers. There's probably business secrets and you should have the ability to protect it. And the only way we know how to do that, is to encrypt it. Why is that? It's because if there's a way to get in, then somebody will find the way in. There have been people that suggest that we should have a back door. But the reality is if you put a back door in, that back door's for everybody, for good guys and bad guys.

Cook then described accusations that Apple pays little or no tax on overseas revenue as "total political crap," and deflected blame on the U.S. tax code for being far outdated.

Watch "Inside Apple, Part Two" (Image: CBS)
Apple's CEO added that repatriating the money in the U.S. is not "a reasonable thing to do" due to high corporate tax rates.

Rose: You also have more money overseas probably than any other American company. […] Why don’t you bring that home?

Cook: “It would cost me 40% to bring it home, and I don’t think that’s a reasonable thing to do. This is a tax code that was made for the industrial age, not the digital age. It’s backwards. It’s awful for America. It should have been fixed many years ago. It’s past time to get it done.”

Rose: Here’s what they concluded: “Apple is engaged in a sophisticated scheme to pay little or no corporate taxes on $74 billion in revenue held overseas.”

Cook: “That is total political crap. There is no truth behind it. Apple pays every tax dollar we owe."

Cook discussed a number of other topics, ranging from the Apple Watch and future products to Chinese labor conditions and human rights.

Rose and Cook at Apple's Campus 2 site (Image: CBS)
Inside Apple concluded with a visit to Apple's work-in-progress Campus 2, which is expected to serve as the company's new headquarters after construction is completed in late 2016. Rose visited on the same day Apple was installing the first of 3,000 sheets of curved glass that will wrap around the building.

Popeye206
Seems like they did a horrible job of hiding new products! :cool:

aerok
Now Samsung can one-up them by using 801 engineers on their camera.
Score: 31 Votes (Like | Disagree)

techguy9
The things under those black cloths are Apple Cars. Damn, they made it really thin!
Score: 26 Votes (Like | Disagree)

This. Very much this. I'm typing this on a Macbook, there's an iPad on the table, an iPhone in my pocket, and an Apple Watch on my wrist. They each are indispensable to me. Why? They work. There's the minimum possible friction between me and what I'm trying to get done.

No, because we would have heard about Steve's head exploding at some of the screwups that have happened in the past few years.

I'm starting to wonder how bad it is using Windows, or jail breaking. Given that the first time I jail broke an iPhone, I bricked it, that says a bit about the frustration...

There were plenty of screw-ups under Steve. OS9 -> OS X was so bad Apple had to give away the first upgrade of OS X. The Cube was cool but a disaster. Launching the iPhone without an app store thinking "Web apps are the way to go". Lunching the iPhone with 2G when 3G was available in abundance.

Nothing really different. Some direction shift but overall it's the same old Apple. Take off your rose colored glasses!

And yes, I'm an Apple fan.
Score: 20 Votes (Like | Disagree)
Read All Comments