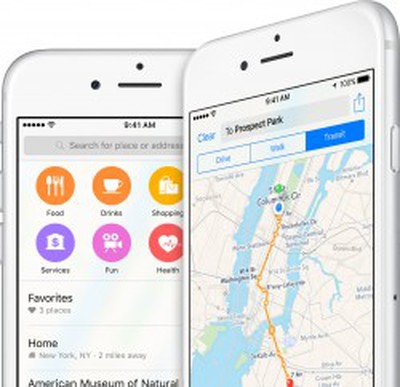 When Apple Maps first debuted alongside iOS 6, it drew significant criticism for its inaccuracies in mapping data, errors when locating points of interest, lack of transit information and odd 3D mapping imagery. Many users opted not to upgrade to iOS 6 due to the app's flaws, and iOS 6 adoption jumped 29 percent once Google released a native Maps app for Apple's platform. Three years later, Apple tells the Associated Press that Apple Maps is now used three times more than Google Maps on iPhone.

Apple says its mapping service is now used more than three times as often as its next leading competitor on iPhones and iPads, with more than 5 billion map-related requests each week. Research firm comScore says Apple has a modest lead over Google on iPhones in the U.S., though comScore measures how many people use a service in a given month rather than how often.

While a lot of the usage gains for Apple Maps can be attributed to Apple Maps being a built-in app that's the default mapping solution for features like Siri and Mail and third-party apps like Yelp, the AP notes that many users who once spurned by Apple Maps have returned. Additionally, many new iPhone users did not experience the troubles of Apple Maps, instead using the newer, more improved version.

Although Apple now holds the lead in mapping on iOS, Google still dominates among all U.S. smartphone owners, with Google Maps having two times more users than Apple Maps. However, much of this is attributed to Apple Maps only being available on iOS while Google Maps is available on both Android and iOS.

In recent years, Apple has made numerous efforts to improve its mapping service. Apple has purchased companies like GPS firm Coherent Navigation and mapping company Placeable in addition to expanding its in-house teams and making data-sharing deals with companies like Foursquare. The Cupertino company has also beefed up Apple Maps with a fleet of mapping vehicles capturing data and introducing new features like Transit directions and, in the future, indoor mapping.

In total, Apple now gets data "from more than 3,000 sources" for business listings, traffic and more. For its new Transit features, Apple even sent out teams to map out subway entrances and signs.

bgro
Apple maps isn't all that bad but google maps is still much better
Score: 26 Votes (Like | Disagree)

ideal.dreams
Yet the search function is still abysmal.
Score: 23 Votes (Like | Disagree)

theipodgod16
Apple Maps still brings returns absurd search results which have nothing to do with my current location. Nope.
Score: 16 Votes (Like | Disagree)
Read All Comments