One of the largest changes in iOS 6 is Apple's decision to replace its Google-powered Maps app with its own solution powered by a combination of its own work and data licensed from other companies such as TomTom. Throughout the developer beta testing process, numerous users reported on the relatively poor quality of Apple's new maps in many regards, while expressing hope that content would improve heading into the public launch.

Despite some improvements over the past few months, Apple's new Maps app has still been one of the most highly criticized aspects of iOS 6 following its debut yesterday. Users have pointed to inaccuracies in Apple's mapping data, errors in locating points of interest, a lack of transit information, and sometimes-bizarre 3D mapping imagery as major issues with the app. 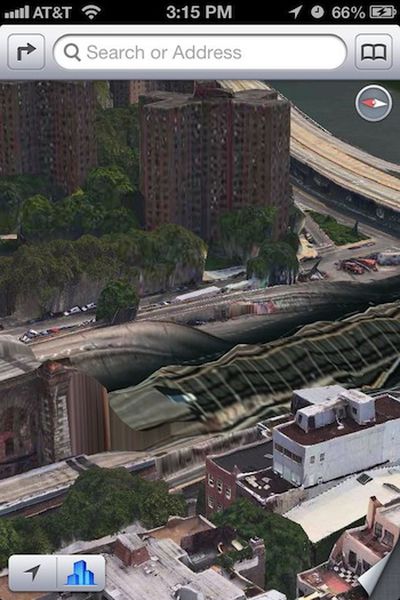 Apple's 3D modeling of the Brooklyn Bridge (Source: @fromedome)
BBC News takes a look at the reception Apple's Maps app is receiving in the United Kingdom, documenting a few of the specific problems reported by its readers:

Among the user complaints regarding Apple's maps sent to the BBC were:

- Some towns appear to be missing, such as Stratford-upon-Avon and Solihull.
- Others, like Uckfield in East Sussex, are in the wrong location.
- Satellite images of various locations, particularly in Scotland, are obscured by cloud.
- A search for Manchester United Football Club directs users to Sale United Football Club, a community team for ages five and above.
- Users also reported missing local places, such as schools, or strange locations. Another screenshot showed a furniture museum that was apparently located in a river.

In one high-visibility case from Ireland, Apple has categorized Dublin's Airfield Park as an actual airport, sparking government officials to contact the company in hopes of addressing the issue.

Dublin's Airfield Park categorized as an airport
While Apple has been working on its in-house mapping efforts for a number of years as evidenced by a series of acquisitions of small companies working in the market, Google's mapping services have been live for over seven years, allowing the company to build up massive amounts of data and expertise. Consequently, it should come as no surprise that Apple's mapping solutions are not as refined as Google's in many cases, but users have generally been hoping for more from Apple's public launch.
[ 928 comments ]

Hellhammer
Apple should just leave some things to Google.
Score: 122 Votes (Like | Disagree)

Apple has over 100 billion dollars. Why don't they just buy Google Maps and overlay their UI on top of it? Why buy mapping data that is years old?


Because Google Maps isn't for sale?

Caliber26
I love all of my Apple products and services. I really do. But taking Google Maps away from us (ESPECIALLY MY STREET VIEW!!!), was a big, big mistake since they are obviously not ready for prime time.

And those 3D/Flyover images are ****** scary. It's like I took a good dose of mescaline and now I'm having horrible hacullinations.
Score: 62 Votes (Like | Disagree)

jabingla2810
It tells me the closest pub to me is over 20 miles away.

If you live in the UK you know thats impossible.
Score: 53 Votes (Like | Disagree)

Wow. Everyone is criticising an app they didn't use much before iOS 6...


And you know that how?

I love Apple as much as most people on here - but this is extremely poor by them.
Score: 46 Votes (Like | Disagree)

At least it'll get better


But it will definitely take a while. I'm just waiting for a Google maps app to come out to be honest, Apple is unlikely ever going to catch up.
Score: 45 Votes (Like | Disagree)
Read All Comments