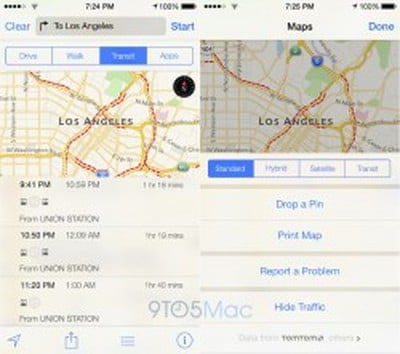 Apple is planning to add a new Transit view to Maps in iOS 9 that features bus, subway, and train routing and directions, according to 9to5Mac. The much-rumored Apple Maps feature would bring native transit routing back to the iPhone for the first time since Apple ditched Google as the default mapping provider on iOS. The report also claims that Apple has made advancements on its indoor mapping project.

"Sources said last year that the transit functionality for Maps includes larger icons for users to more quickly spot airports, subway stations, and train stations within the Maps app. In addition to the main functionality, there is also a trip planning feature for transit, and a new Transit view alongside the existing Standard, Hybrid, and Satellite/Flyover views."

Transit features in Apple Maps were originally expected to launch alongside iOS 8 last year, but were delayed due to personnel issues and data inconsistencies within Apple. The company has reportedly "refined the data, added new cities, and developed a new push notifications system" since that time, however, and the feature is now ready to be unveiled at the upcoming Worldwide Developers Conference in June.

Apple has been actively expanding its in-house routing team over the past few years through multiple job openings. In late April, for example, the company put out a job listing for a "Maps Software Engineer" part of the Routing team, as reflected by at least one Apple employee's LinkedIn profile. "As a member of the Routing team, you will work on one of the most anticipated features of Apple Maps," the job description reads.

how can you work at Apple and be dumb enough to post in your LinkedIn profile that you are working on unannounced features for a product.
Score: 21 Votes (Like | Disagree)

2457282
I have liked the map app since the start regardless of the naysayers.

I look forward to the on-going improvements and continued deep integration with the rest of the iphone and now watch.
Score: 11 Votes (Like | Disagree)

how can you work at Apple and be dumb enough to post in your LinkedIn profile that you are working on unannounced features for a product.


To be fair, she just directly quoted from the job posting, which was posted for the public at one time. Just like the article mentions... :rolleyes:

In late April, for example, the company put out a job listing for a "Maps Software Engineer" part of the Routing team. "As a member of the Routing team, you will work on one of the most anticipated features of Apple Maps," the job description reads.

how can you work at Apple and be dumb enough to post in your LinkedIn profile that you are working on unannounced features for a product.


Did you read the article? All she did was quote the job listing.
Score: 9 Votes (Like | Disagree)
Read All Comments

Friday May 14, 2021 11:52 am PDT by Juli Clover
Following the discontinuation of the iMac Pro, Apple also appears to be discontinuing Space Gray "Magic" accessories that it sold separately alongside the iMac Pro. The iMac Pro was the only Space Gray Mac, and Apple designed special matching accessories for it. The Space Gray Magic Mouse 2, Magic Keyboard, and Magic Trackpad all now say "While supplies last" in small wording at the bottom...
Read Full Article • 357 comments