Over the course of the last week, Apple appears to have ceased selling two popular smart lock products in its retail stores and online. Neither the August Smart Lock nor the Kwikset Kevo Wireless-Enabled Deadbolt Lock are listed on Apple's website, but both were still for sale on November 13.

The August Smart Lock and the Kwikset Kevo are both Bluetooth-enabled locks that allow users to unlock their doors using their iPhones. It is not clear why Apple has decided to stop selling the locks, but it could be in an effort to highlight only products that offer HomeKit compatibility. The Kwikset Kevo and the August Smart Lock are not HomeKit-enabled products and cannot be used with other HomeKit devices. 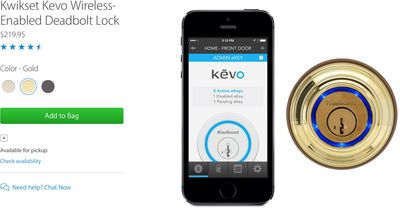 While Apple is no longer selling the Kwikset Kevo or the August Smart Lock, it is selling the Schlage Sense Smart Deadbolt, another smart lock that does offer HomeKit compatibility. The Schlage Sense Smart Deadbolt is in fact the only locking product that offers HomeKit integration thus far. August has debuted a second-generation product that includes HomeKit integration, and when that begins shipping to customers, it's possible Apple may continue offering the August Smart Lock in its stores.

Apple has also pulled the Belkin WeMo switch from its online store, suggesting it may be ceasing to offer several home-connected products that are not also offering HomeKit to avoid confusing its customers.

Apple sells quite a few HomeKit products in its retail stores and online, offering devices from Ecobee, Philips, Elgato, Lutron, and Schlage.

cariacou
I think one just needs to check the reviews on Amazon to understand why Apple pulled these 2 locks and kept the Schlage...
Score: 4 Votes (Like | Disagree)

That's Eddie Cue to you.
Score: 2 Votes (Like | Disagree)

AdonisSMU
Kevo has never not worked for me. I love it!
Score: 2 Votes (Like | Disagree)

_mdavenport
I'd like to see a smart lock with NFC that works just like apple pay. No need to unlock my iPhone and open an app; simply hold the iPhone up to the lock, authenticate with Touch ID, and voila.
Score: 2 Votes (Like | Disagree)

I'm still waiting for a PoE or other wired "smart" lock... You can't trust ISM band wireless with such an important task... Nor batteries.

It's probably the least thought out part of the IoT. Lots of devices equal lots of interference.

5Ghz is already getting crowded in my neighborhood, despite the short range. There are 5 houses within 400 feet LOS of my house and I can see 3, 5Ghz WiFi APs (other than my 2) from my MBP when I'm sitting in my living room.

I've mitigated some of my issues by setting up 4 different WiFi networks with the APs all spread apart (closest to the "center of action" for each task).

All my 2.4Ghz APs are on 20Mhz mode. Using the 40Mhz mode on most APs just makes interference more of an issue and generally makes the error-free range much smaller (for not a whole lot of real world speed). Sticking to the 20Mhz mode also seemed to give bluetooth a much larger range for me. Despite having all that WiFi in the house, I can still get 60-90 feet with my bluetooth audio devices.

I would say out of all the locks I've researched, the Schlage is probably the most impressive / secure / dummy proof. That may not be saying much as smart locks are still relatively new and I'm sure in 3-5 years from now, we'll all be laughing at how immature these products are.

However, the Schlage can be unlocked via 4 methods, Using the App on your iPhone, using Siri, Using the keypad on the deadbolt itself or using the actual key that comes with it (regular key, you can make duplicates at the hardware store).

If the battery dies (they're supposed to last one year), the first three methods won't work, but the key will always work, like a traditional deadbolt.

I also like that it doesn't have proximity unlock, because I don't trust these devices to be able to figure out if the iPhone that's in proximity is INSIDE the House or OUTSIDE. What if it's inside the house near the door and the house is locked? Anyone can unlock the door by just trying the handle? I don't know.. Anyway, Schlage isn't like this which was a bonus for me. And seeing as the Schlage isn't a true IoT device, the chances of getting it hacked are practically none since it doesn't communicate with the outside world like something like the Ecobee3, Nest products, etc.

Finally, everything inside the house is working beautifully for me, so I know it's really the connection to the outside via the Apple TV / iCloud / Network and a lot of other unknowns and uncontrollable aspects.
Score: 1 Votes (Like | Disagree)

Kevo has never not worked for me. I love it!

I've got the Kevo (have only had it since late last week) but so far it's great. My phone stays in my pocket and the deadbolt locks/unlocks every time.

Same for me. It's been working great! Especially since the software and the lock firmware update a month or so ago. Previously it would work immediately about 9 out of 10 times (the other 1 out of 10 I would have to pull out my phone and it would work right away). Now with the updates its probably 98% or 99% awesome.

I just wish the kevo plus was cheaper. $70 additional to the locks for remote lock/unlock is a bit steep.