As indicated by an announcement yesterday, Apple has teamed up with Parisian fashion boutique Colette to show off the Apple Watch at the retailer's gallery on Rue Saint-Honoré in Paris for today only. The special event marks the first public appearance for the Apple Watch since being announced last month at a media event, as a long line began forming around Colette's before the event started at 11 AM local time. 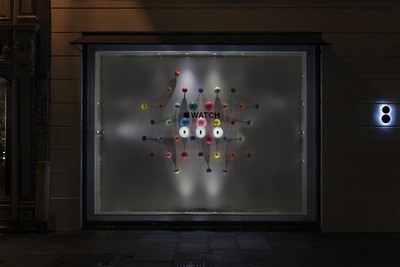 Image taken by Elle magazine editor-in-chief Robbie Myers
Customers are only being allowed to look at the devices and will not have the opportunity to actually try out the smartwatch's capabilities. However, some journalists were allowed to try on the devices. Apple will also not be announcing any new details about the device at today's event, as info about full pricing and battery life remain unknown.

In addition to positioning the Apple Watch as a consumer electronics product, Apple has also been pushing the wearable device as a fashionable accessory. The company invited top fashion editors and bloggers to its September 9 media event, and even allowed some to go hands-on with the smartwatch. Fashion publications including InStyle and Vogue were impressed with the Apple Watch, praising its design and the Digital Crown input method. However, others like The Doneger Group's Roseanne Morrison were unimpressed with the device, calling it "not pretty" and "future techno as opposed to feminine sexy."

At its event earlier this month, Apple said it is targeting an early 2015 launch for its wearable device. A report after the event stated that Apple would be "lucky" to launch the watch by Valentine's Day due to software development issues. The Apple Watch will start at $349 and may run up to $1,200 for the high-end Edition version.

H2SO4
Could have ironed his shirt. After swapping it for one that fits him.
Score: 33 Votes (Like | Disagree)

BruceEBonus
The photograph is symbolic.

It represents: Fashion Over Form


Which the iWatch will be.

MonkeySee....
Amazing isn't it. Apple know exactly how to market their stuff. Push it hard in the fashion industry and get it in magazines that tell women what to buy. (Vogue, Cosmopolitan etc)

Clearly we're living in a different age now but that picture of Ive with Anna Wintour (Editor of Vogue) & Karl Lagerfeld (Creative Director for Chanel) shows exactly how this trinket is being marketed.

Au contraire. Even though I dislike digital watches and will not buy the Apple one, I think they are doing EXACTLY the right thing to ensure its success. Watches have always been jewelry first, utility devices second ( unlike phones, computers, mp3 devices, etc..).

In fact this is exactly what Steve Jobs would have done. Someone posted this video on another thread (Steve Jobs on fashion) :

fumi2014
Clearly we're living in a different age now but that picture of Ive with Anna Wintour (Editor of Vogue) & Karl Lagerfeld (Creative Director for Chanel) shows exactly how this trinket is being marketed.

However, if it is to win over young, affluent people, Apple need to climb into bed with these fashion individuals (who have incredible influence on persuading their readers what is 'cool').
Score: 13 Votes (Like | Disagree)
Read All Comments