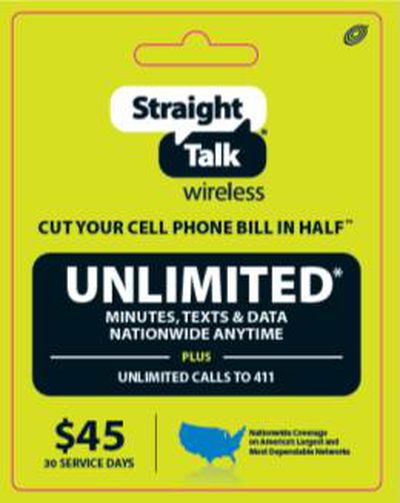 In recent months, the Federal Trade Commission has taken a significant interest in carrier throttling practices and today handed down a ruling that could have future ramifications for carriers who throttle their unlimited customers.

As reported by Re/code, the FTC has ordered prepaid wireless carrier TracFone to pay $40 million to consumers who paid for unlimited service and were then throttled after reaching certain data limits.

TracFone advertised "unlimited text, talk, and data" for $45 a month under the brands Straight Talk, Net10, Simple Mobile, and Telcel America, and until September 2013, did not clearly disclose its throttling policies that saw customers experiencing data speeds that were cut by up to 90 percent, thereby violating the FTC Act.

While this ruling only affects TracFone at the current time, there are several other carriers that have similar practices for their unlimited customers. AT&T and Verizon no longer offer unlimited data plans, but continue to provide unlimited data for many people who remain on grandfathered plans. AT&T has engaged in throttling practices for years, often cutting off customers who exceed 5GB of LTE data usage.

"The issue here is simple: when you promise consumers 'unlimited,' that means unlimited," said Jessica Rich, director of the FTC's Bureau of Consumer Protection. "This settlement means that Straight Talk, Net10, Simple Mobile, and Telcel America customers will be able to get money back from the company for services the company promised but didn't deliver."

Last year, Verizon planned to throttle its high-usage unlimited data LTE customers, sparking interest from FCC chairman Tom Wheeler, who said he was "deeply troubled" by the decision. Verizon ultimately reversed course and opted not to throttle its unlimited customers, but the FCC's attention was already roused, and the agency began questioning all carriers on their unlimited throttling practices.

The government's interest in carrier throttling practices led the FTC to file a federal complaint against AT&T in October of 2014, accusing the carrier of misleading its smartphone customers by charging them for unlimited data and then going on to reduce data speeds. Based on today's TracFone decision, AT&T may also be facing hefty fines in the future, and the FTC's ongoing involvement in carrier throttling of unlimited customers could finally put an end to the practice.

Everyone to whom throttling would be relevant knows about throttling, and nows the carriers do it. And its in the contract that they can do it. It's not like this stuff is a secret. So they did it on some people, and those people are now pissed because they don't like the terms of the contract that they signed anymore. But worry not, bureaucrats to the rescue. Let's just steal their money back because they're not happy with their decision anymore.


Are you the AT&T customer service rep I talked to the other day? Huh, small world.
Score: 32 Votes (Like | Disagree)

Everyone to whom throttling would be relevant knows about throttling, and nows the carriers do it. And its in the contract that they can do it. It's not like this stuff is a secret. So they did it on some people, and those people are now pissed because they don't like the terms of the contract that they signed anymore. But worry not, bureaucrats to the rescue. Let's just steal their money back because they're not happy with their decision anymore.

k1121j
its about time they make them honor "Unlimited" its not if its limited. I'm surprised its gone on this long
Score: 26 Votes (Like | Disagree)

jtrenthacker
GOOD! I hope they fine the hell out of all of them. I'm an unlimited customer with AT&T and I've now been bitten by their throttling practices. We just recently moved across the country. Before the move, I worked at a university that had campus wide wifi and of course I had wifi at home. Between the two, I hardly ever used LTE. After we moved, we were without internet for three weeks. I would use the LTE for everything on my phone including Netflix. Soon I was getting texts that I will be throttled if I go over 5gb. Sure enough, eventually LTE became almost unusable. Then last week, I start getting texts, emails, and an actual letter telling my to stop tethering! Mind you, we've had internet at the house for a couple weeks now. I have never used tethering. They say if I continue they will change my plan without my consent. I called the customer service line and bitched about it. They didn't really apologize. They just tell me my plan will stay the same and that there may be apps on my phone that act like tethering (total BS). We have never had a bad experience with AT&T until now. All because I went over 5gb in data on my UNLIMITED plan? Kiss my att.
Score: 25 Votes (Like | Disagree)

HobeSoundDarryl
OK FTC, but dole out the fines to more than just the cheap(est) players. It will be wrong to fine a player like this while allowing AT&T, Verizon etc to carry on without fines. Of course, AT&T & Verizon make big campaign contributions so lets see if the Gov punishes wrongdoing or if this "wrongdoing" is defined as not contributing enough to campaigns.

Seems odd that a relatively small player would get a headline fine for throttling while the much bigger, much deeper pocketed players are left out.
Score: 17 Votes (Like | Disagree)

ArtOfWarfare
Can we do something about the regional broadband monopolies (IE, Comcast, Verizon, Time Warner?) They concern me more than the cellular providers, which at least compete with each other so have some interest in screwing over their customers less so that people will switch.
Score: 13 Votes (Like | Disagree)
Read All Comments