Apple's latest iOS 8.2 beta includes a reference to an Apple Watch companion app that will be installed on the iPhone to give users a way to access settings on their Apple Watch devices, and a new report from 9to5Mac using code created by developer Steven Troughton-Smith (which can be found on Github), details some of the functionality that can be found in the upcoming app and in the Apple Watch.

According to screenshots of the app running on an iPhone, the Apple Watch will be able to send reminders to stand up every hour, progress reports on activity at selected intervals, and notifications for goal completions such as reaching a daily Move, Exercise, or Stand goal. 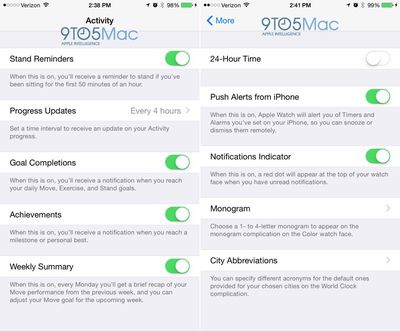 The Apple Watch will also be able to send notifications for achievements, such as when a personal activity milestone is met, and there's an option for a Weekly Summary, which will give users a brief recap of how much they moved during the previous week.

In addition to various fitness-related alerts, there are sections in the app to turn on push alerts from the iPhone for Timers and Alarms, get a notification alert in the form of a red dot on the Apple Watch face, and specify acronyms for various cities in the World Clock. All of these aforementioned settings and notifications can be controlled within the "Companion" app.

There's also an interesting feature that lets users choose a one to four letter monogram that will appear on the Apple Watch's Color watch face, which is described as a "Complication." First introduced in new marketing earlier this year, Apple Watch Complications are special functions that are displayed within various watch faces, such as stock quotes, weather, and more, like the monogram. With this enabled, the Apple Watch face will display a user's initials.

Like the iPhone and the iPad, the Apple Watch will include an option for a passcode that's used to verify Apple Pay payments. As has been detailed in the past, the Apple Watch will require users to enter a passcode when putting the watch on for the first time, and it will make sure that skin contact is maintained to prevent unauthorized Apple Pay payments with the device.

The Companion app also appears to confirm that the Apple Watch will indeed feature its own storage and the ability to play songs stored directly on the device, as the About Screen lists storage capacity, songs, and photos stored on the Apple Watch.

As the launch of the Apple Watch approaches, details on the device are beginning to leak out, but there are still several unknown elements. For example, there's no solid word on how long the battery will last, aside from Apple CEO Tim Cook's suggestion that users will need to charge it on a nightly basis, and we have no word on pricing, aside from the entry-level $349 Sport model. There's also no clear cut launch date in place, but the most recent rumors have suggested that the device could be released in March.

There are a few other minor details that can be gleaned about the Apple Watch based on the Companion app screenshots, and a full range of images is hosted over at 9to5Mac. Other details include stock selections, the use of the Taptic Engine for Maps directions, various Accessibility features, and more.

I think they should find a different word to use than 'Complications' :)


"In horology, the study of clocks and watches, a complication refers to any feature in a timepiece beyond the simple display of hours and minutes."
Score: 68 Votes (Like | Disagree)

troop231
I think they should find a different word to use than 'Complications' :)
Score: 55 Votes (Like | Disagree)

I think they should find a different word to use than 'Complications' :)

This is a watch industry term that has been used since the 16th century.

TreyCox
I'm not even gonna lie. I'm buying this day one just because I can.
Score: 35 Votes (Like | Disagree)

even with a passcode, what's to prevent someone to charge something to an apple watch while you're standing in a crowded subway?


You have to double click the button next to the digital crown to activate Apple Pay, it is not always on.
Score: 32 Votes (Like | Disagree)

Though not announced based on the fact that Sports model has an Ion Glass screen vs Sapphire and is the less flashy brushed aluminum over chromed steel or whatever is on the other models; it's a fair assumption. I mean if you see a brown pile, it looks like crap, smells like crap are you really going to taste it to make sure it's crap?


You sir have never eaten Campbell's meatballs. Sometimes it's worth the risk.
Score: 27 Votes (Like | Disagree)
Read All Comments