Apple Watch Will Use Skin Contact for Apple Pay Security

When Apple announced that the Apple Watch would be able to use Apple Pay, the company's new mobile payment initiative, many wondered how secure the payments would be if the device lacked the security of Touch ID, which is used in the iPhone 6's implementation. Now, several members of the press have confirmed how the system works. 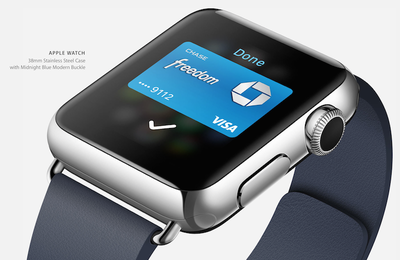 Both Rene Ritchie of iMore and Cult of Mac report that when a user first puts on the Watch they must type in a PIN code to authorize Apple Pay. Once it's on, the Watch uses constant skin contact, which it can sense using the four sapphire-covered lenses on the underside of the device, to authorize payments. However, once the device is removed from a user's wrist, they must re-enter their PIN when putting the device back on their wrist.

Thanks to sensors on the Apple Watch’s back, the device can tell when it’s being worn and when it has been taken off. When you first put the watch on, you must enter a code. When the watch is removed from your wrist, the watch locks itself and can’t be used for payments unless the code is entered again.

MasterCard's mobile payment executive Ed McLaughlin also told Re/code that the Watch would use the four sensors on the back of the device as a security measure, while Visa CEO Charlie Scharf said that Apple understood the risks of contactless payments and has a solution.

Diseal3
Unless they take your wrist with the watch...
Score: 36 Votes (Like | Disagree)

Unless they take your wrist with the watch...


Yes, I can just picture a thief walking into a store with a severed hand and paying for something with no one saying 'gee, that looks weird"
Score: 33 Votes (Like | Disagree)

Not very secure. Crafty thieves would just have a slither of plastic at body temp to slide underneath the watch as they nab it. Im sure someone will start selling a tool. Bad idea to leave something authorised for a long time period. Asking for trouble.

proline
Apple's ingenuity: 1
Jerks making up flaws in a system they know nothing about that isn't going live for another month: 0
Score: 32 Votes (Like | Disagree)

springsup
That's very cool. Hope for their sake that they patented that idea.
Score: 23 Votes (Like | Disagree)

BornAgainMac
Hopefully it detects that the hand is warm to prevent thefts.
Score: 21 Votes (Like | Disagree)
Read All Comments

Friday July 10, 2020 11:12 am PDT by Juli Clover
Apple this month published a support document that warns customers against closing their Mac notebooks with a cover over the camera as it can lead to display damage. Image via Reddit Apple says that the clearance between the display and the keyboard is designed to very tight tolerances, which can be problematic. Covering the camera can also cause issues with automatic brightness and True Tone....
Read Full Article • 221 comments

Friday July 10, 2020 2:58 am PDT by Tim Hardwick
At last month's WWDC, Apple officially announced that its Mac computers will be transitioned from Intel x86 to homegrown Apple Silicon chips. Apple said it plans to deliver the first Apple Silicon Mac by the end of the year and complete the transition in about two years. According to Apple analyst Ming-Chi Kuo, a 13.3-inch MacBook Pro with a form factor similar to the current 13.3-inch...
Read Full Article • 146 comments