During the demonstration, Pall conducted a conversation with a German-speaking colleague, with Skype providing real-time translation from German to English and vice versa. According to German speaking audience members at the conference, the translation software performed "pretty good" but not perfectly. 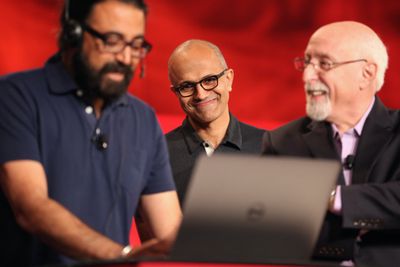 Nadella and Pall demo Skype Translator at the Code Conference

Skype Translator results from decades of work by the industry, years of work by our researchers, and now is being developed jointly by the Skype and Microsoft Translator teams. The demo showed near real-time audio translation from English to German and vice versa, combining Skype voice and IM technologies with Microsoft Translator, and neural network-based speech recognition.

Microsoft hopes to use the huge number of conversations that take place on Skype to improve its translation tools with real language and speech patterns, which could lead to much better back and forth translations. Pall says the company is "working through" potential privacy issues that surround the use of customer calls.

While Microsoft plans to debut Skype Translate on the Windows platform later this year in a beta capacity, the company says that it will expand to other platforms, including OS X and iOS, shortly after the Windows version launches.

Microsoft will start with a handful of languages and only for the Windows version of Skype, though Microsoft hopes to quickly add more languages as well as support for the many types of computers and mobile devices that Skype customers use.

At launch, the Skype translator will only work with a small number of languages, those that "it can do well" but Microsoft has plans to continually add additional languages to the app as development progresses.


Update: The full video of the demo has been released by Re/code and available above.
[ 117 comments ]

Santabean2000
Learning a new language will still be relevant, but man, this tech is cool. Huge possibilities in education.
Score: 28 Votes (Like | Disagree)

AngerDanger
Nadella's eyes are staring into my soul… :(

Nadella's eyes are staring into my soul :(


This man is no fool. He has a vision for MSFT that has been lacking for many years.
Score: 14 Votes (Like | Disagree)

longofest
now we're getting close to a Universal Translator, though I continue to hold that you haven't heard Shakespeare until you have heard it in its original Klingon.
Score: 11 Votes (Like | Disagree)

trekkie604
just watched the video... that is extremely awesome. Except for the german lady's crazy eyes.
Score: 9 Votes (Like | Disagree)

just watched the video... that is extremely awesome. Except for the german lady's crazy eyes.


I am German and I also watched the video ... and it is a pretty "staged" demo - unfortunately.

Nevertheless, I think it's a great technology and approach by MS and we will get there in terms of translation quality some day. But for now, I have to destroy your illusion ... sorry.
Score: 8 Votes (Like | Disagree)
Read All Comments