Just a day after being released into the App Store, Microsoft's new iPad Apps, including Word, Excel, and PowerPoint, appear to be quite popular with consumers, ranking as the top three free iPad apps in the App Store, with the redesigned Microsoft OneNote in the number four spot.

Microsoft Word for iPad is ranked as the number five top grossing app, while Excel is ranked twelfth, indicating Microsoft's downloads are raking in some cash in the form of Office 365 subscriptions, which are available within the apps as a $9.99/month or $99/year purchase. Users can also purchase Office 365 subscriptions outside of the app, however, which would not influence App Store charts. 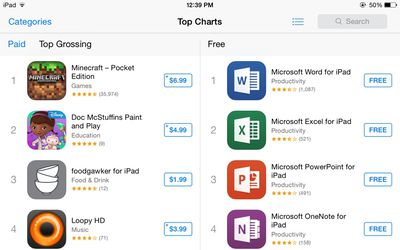 While Microsoft's apps can be downloaded at no charge and allow documents to be viewed or presented, creating and editing documents requires an Office 365 subscription that also earns Apple a 30 percent cut of each in-app purchase, making the current success of the apps beneficial to both companies.

Microsoft Office apps for the iPad have been a long time coming, with Microsoft first indicating its intention to work on mobile Office apps in 2010. In early 2012, a prototype design of Office for iPad surfaced, but it wasn't until Satya Nadella took over as CEO that the apps actually saw a release.

In the past, Microsoft has used the lack of Office productivity apps on the iPad as a main advertising point for its Surface Tablet, attempting to lure customers to the product on the strength of its popular productivity software. That strategy was largely unsuccessful, however, as the original Surface failed to catch on with consumers.

All three of Microsoft's productivity apps can be downloaded from the App Store for free, with full functionality unlocked through an Office 365 subscription. While Office for iPad requires Office 365, Microsoft yesterday updated Microsoft Office Mobile for iPhone to allow both viewing and editing for free, no subscription required.

dannyyankou
And then got deleted by thousands of people when they discovered it's $99.99/year.
Score: 135 Votes (Like | Disagree)

Dulcimer
and most of them quickly realized that they couldn't actually make any documents :P
Score: 71 Votes (Like | Disagree)

ashwin4
Well that's what happens when you market it as free when it really isn't...
Score: 68 Votes (Like | Disagree)

I also downloaded it to give it a try, just to see what they came up with. But actually, you can't do anything with it without paying. Officially you can 'read' documents, but only if you have the microsoft drive (or however they call it) - there are no other ways of getting documents in there. I know I can only read, but sort of was hoping to have some decent ways of getting documents in there to read.

So yes, I downloaded, found out that not usable (even for a quick try out) and deleted.

downloading is not the same as paying for it ...

I also downloaded it to give it a try, just to see what they came up with. But actually, you can't do anything with it without paying. Officially you can 'read' documents, but only if you have the microsoft drive (or however they call it) - there are no other ways of getting documents in there. I know I can only read, but sort of was hoping to have some decent ways of getting documents in there to read.

So yes, I downloaded, found out that not usable (even for a quick try out) and deleted.

To bad they don't have a measure for the most deleted app .....

I thought Microsoft was way too late to the party to have such a popular app.

But it's also not $99 specifically to use the app.

For one - if you already subscribe to Office 365, it's free with no additional fees.

Students get a HUGE discount on 4 years of service.

Lots of bitter people over silliness. Don't want to use Office on the iPad - then don't. The need to ridicule the app or Microsoft for having a revenue model is ridiculous.
Score: 39 Votes (Like | Disagree)
Read All Comments