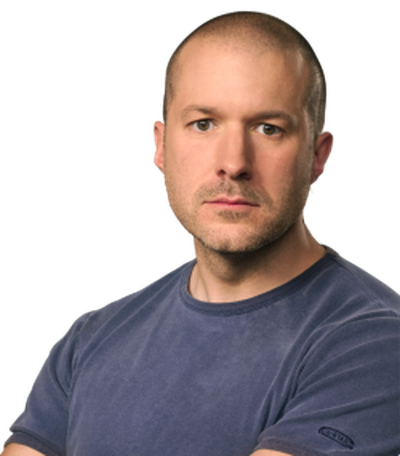 In a lengthy interview with The Sunday Times, Apple's Senior Vice President of Design Jonathan Ive discussed a number of topics including his philosophy on design and collaboration, the strong relationship he had with former Apple CEO Steve Jobs, and the future of Apple along with thoughts on new product categories.

Speaking on his approach to design, Ive stated that he starts on a project by imagining what "a new kind of product should be and what it should do," revealing that his design team consists of 15 people from the United States, New Zealand, Japan, Australia and Britain. Ive added that the majority of work amongst his team happens in his office, which consists of computer controlled cutting machines and a large wooden bench that resembles a Genius Bar for new products and prototypes.

[Ive] spent "months and months and months" working out the exact shape of the stand of the desktop iMac computer because "it's very hard to design something that you almost do not see because it just seems so obvious, natural, and inevitable." When he has finished a product, even one as fresh and iconic as the white headphones that came with the first iPod, he is haunted by the idea: could I have done it better? "It's an affliction designers are cursed with," Ive frowns.

On the topic of his late friend and former Apple CEO Steve Jobs, Ive spoke out against the negative comments about Jobs' tough management style, stating that the former CEO had unique characteristics which led to great work:

So much has been written about Steve, and I don't recognize my friend in much of it. Yes, he had a surgically precise opinion. Yes, it could sting. Yes, he constantly questioned. 'Is this good enough? Is this right?' But he was so clever. His ideas were bold and magnificent. They could suck the air from the room. And when the ideas didn't come, he decided to believe we would eventually make something great. And oh, the joy of getting there!

When asked about wearable technology and whether Apple will make an iWatch smart watch, Ive replied that there are "obviously rumors about [Apple] working on one", but stated that he would "obviously" not be talking about the subject, likening the rumors surrounding the iWatch to "a game of chess." Recent reports have pointed to Apple currently developing such a device to be revealed later this year, which may include health-tracking features and integration with other iOS devices.

Finally, Ive answered as to whether he'd stop working at Apple if the company could no longer make innovative products, and gave his optimistic vision for the future:

"Yes. I'd stop. I'd make things for myself, for my friends at home instead. The bar needs to be high." But, he adds: "I don't think that will happen. We are at the beginning of a remarkable time, when a remarkable number of products will be developed. When you think about technology and what it has enabled us to do so far, and what it will enable us to do in the future, we're not even close to any kind of limit. It's still so, so new."

Traditionally a quiet figure, Ive has been very instrumental in Apple's success since assuming his role after the return of Steve Jobs in 1997, designing some of Apple's most successful products including the iMac, MacBook Pro, MacBook Air, iPod, iPhone, and iPad.

Currently, he leads Apple's Industrial Design Group and oversees the company's Human Interface division, a position he took in October 2012 after then-Senior Vice President of iOS Software Scott Forstall left the company. Ive also directed the effort behind iOS 7, which was released last September and featured a completely new design in addition to various other tweaks.

I think he should have already quit. I have yet to see another innovative product from apple since 2007 with the iPhone. Even then, the iPhone has kept the same design que and really has yet to make a drastic design change (in my opinion)

What's your definition of innovative? I think the iPad was innovative in the way that it changed the entire PC market. Also, do you only judge Apple's innovation by new categories of devices? What about improvements on current devices? What about how far the Mac has come since 2007? How about my light as a feather macbook air with an aluminum unibody case with the best trackpad on the entire market? Find me a PC alternative of a MBA that isn't garbage. You are a perfect example of an ADHD society. You don't get new market changing product categories coming out every 2 years. Maybe once a decade. It's as if you want a holographic iPhone with a video projector and an ever lasting battery. This ain't Willy Wonka and the goddamn chocolate factory. This is real life technology that takes time and a lot of planning to create. I'd rather them take their time than release crap, like certain Korean companies which shall remain nameless.
Score: 37 Votes (Like | Disagree)

You do realize there is a lot more to a camera other than megapixels right?
Score: 24 Votes (Like | Disagree)


Seven words: What the hell are you talking about?
Score: 21 Votes (Like | Disagree)

yjchua95
Samsung copying the design of the 3GS among other things is why they are now dominant among vendors of Android phones. Their current position is almost entirely based on that theft. Not only Apple, but also all other Android players including Google, should be enraged about that.
Score: 12 Votes (Like | Disagree)

ouimetnick
Who else read the article in Jony's voice?
Score: 11 Votes (Like | Disagree)

LizKat
What the heck is "another innovative product" anyway? You want the iPhone to make toast? Cook rice? Kill rats?

The G4 powerbook was an innovation. The black Macbook was an innovation. The iPhone 5C with its sturdy steel frame and silky, seamless plastic cover is certainly an innovation. The square nano with radio and a clip was an innovation. Everything they bring out has involved innovative approaches to design, manufacture, reliability. My 2nd gen nanos have lasted longer than a lot of people's cars for God's sake. How is that not innovative, to have a little gizmo that holds a lot of music and plays it into your car stereo or your kitchen radio or your brain through earbuds, all while being willing to take a beating being thrown around in purse, pocket or car console?! It's amazing for what it cost me. Amazing.

It's fashionable to bash Apple for not being innovative since Steve Jobs died. I'm starting to find it as tiresome as any other "fashion" that people don't have the sense to abandon for some other briefly trendy idea. It feels about as old as saddleshoes to me. 1950s!!