Best Buy is introducing another special deal this weekend, offering a minimum of $150 for trade-ins of working iPhone 4s and iPhone 5 smartphones. Customers must buy a new smartphone with two-year contract on AT&T, Sprint or Verizon, however. The offer is good through the end of the day tomorrow, March 1. The chain has also reduced the price of the base 16GB iPhone 5s to $150 to match the buyback. 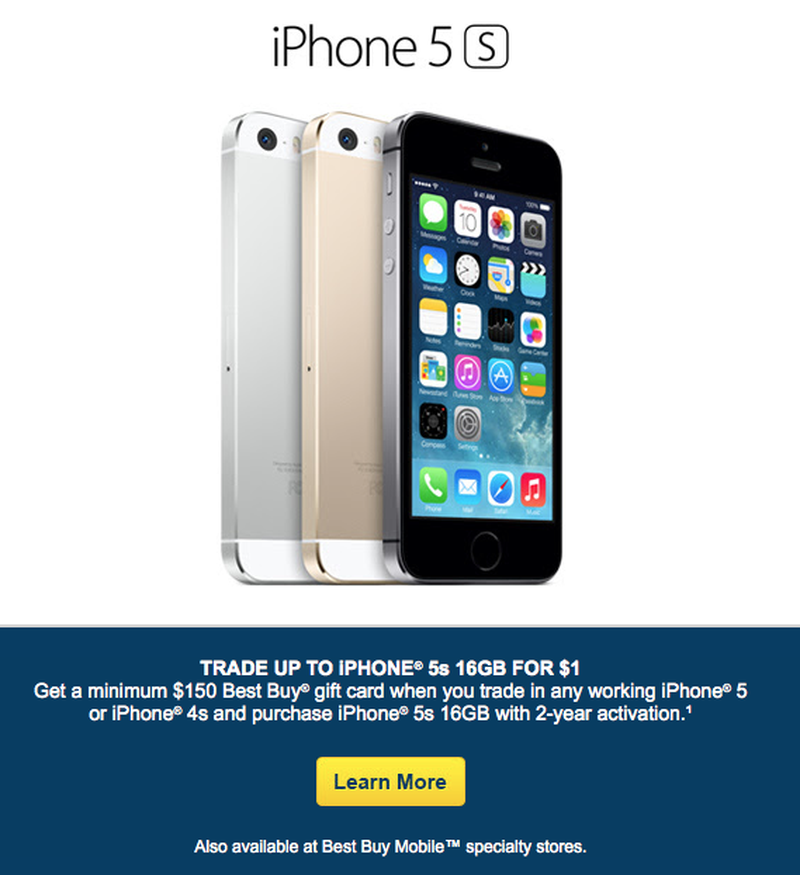 With a number of carriers moving away from two-year contracts for its customers -- instead focusing on non-subsidized, but cheaper, monthly plans -- it may be affecting the bottom line of retailers like Best Buy because plans like AT&T Next do not, in many cases, require customers to pay money up front.

For upgrade-eligible iPhone-owners looking to move to the iPhone 5s, this promotion could be an inexpensive way to do that.

theanimala
This is a horrible offer, you can sell an iPhone 4s or iPhone 5 for much more than the 199 are offering. Just a few months ago I traded in a totally worthless eight-year-old BlackBerry and got $99 off my iPhone 5s. That was a good trade in deal, this one is not.
Rating: 8 Votes

Would you call a house with $0 down payment on its mortgage a free house?

Of course not. You would just call it what it is: no down payment.
Why is it different with smartphones?
Rating: 6 Votes

Would you call a house with $0 down payment on its mortgage a free house?

Of course not. You would just call it what it is: no down payment.
Why is it different with smartphones?


Not to mention that the phone isn't free at all. You are getting store credit, that's it. So unless you are ready to purchase something from Best Buy, this offer isn't worth much.
Rating: 5 Votes

praterkeith
My iPhone 5 is still kicking ass but he knows his time is up this fall, most likely! So no thanks, Best Buy. I'll wait for the iPhone 6.
Rating: 5 Votes

tevion5
Do Amercans really think they are getting a phone for "free"? They are paying MORE than what you would straight from apple only overtime.

It's essentially what's known as "hire purchase". It's more expensive than off the shelf. Ideal would be to buy an unlocked direct from apple, considering you have the cash up front.

Even still, of you are on a budget, these contracts cost far more.
Rating: 4 Votes

iamMacPerson
I was considering it when they sent me the email with this offer, as the minimum trade in value was $150 for a 4s. I thought maybe they'll give me $300 for my iPhone and I can use the remaining amount to buy some other things.

Nope. A measly $230 for my iPhone 5, Verizon (Factory Unlocked), 32GB white. I'll stick to my iPhone 5 until later this year when the new iPhone 6 is announced. Plus, I signed up for the free $50 gift card promo, so as long as I upgrade by the end of the year I get a free $50 gift card.

I'm already planning to camp out for around 8 hours or so on launch day.
Rating: 2 Votes


I am contract free but I couldn't convince my brother not to do so. For him, it makes sense to sign a contract as he gets discount from his employer, He also upgrades on the dot every two years. so it actually ends up being cheaper.

No one size fits all.
Rating: 1 Votes

How exactly do Americans end up paying more on a contract? I thought they paid less, but were forced to stick with the company for 2 years.

Make note of this stuff. This says Best Buy is offering a *** FREE *** iPhone. You just have to trade in your worthless old phone.

1) The iPhone you get is not "free" - it costs you a lot more than if you just bought it direct from Apple.

2) They are ripping you off. They are giving you a few bucks for something that you could sell for $300 elsewhere. After paying you $150 for your old iPhone, they will turn around and sell the same phone for around $635 to $735 to the next sucker that signs up for this.
Why $735? Look at the above cost for signing a contract with AT&T. They will discount the device $100-$200 for being older. They still make a LOT of money on this.

1) Sell your old phone on someplace like eBay, Craigslist, or Swappa.

2) Use the money from your old phone toward buying the new phone outright.
Rating: 1 Votes
[ Read All Comments ]