Earlier this week, an Apple patent application highlighted Apple's interest in potentially using sapphire as a display glass cover on future iPhones, and according to a new report [Google Translate] from Taiwan's Apple Daily, the company's assembly partner Foxconn has begun trial production on just such a device with an initial run of 100 units. 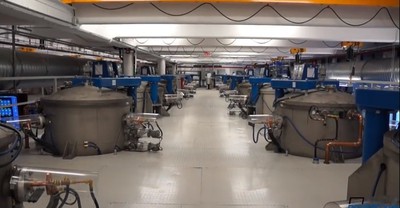 Furnaces for sapphire glass production
The report notes that while it is a small number of devices, the production does mark a significant step in experimentation with the material on a broader scale for Apple. The report also claims that Apple's sapphire suppliers Synopsys and Bern Optics have made significant investments in cutting machines and other equipment recently, fueling speculation that Apple is ramping up its sapphire usage. MacRumors has also heard unconfirmed word that Apple has been working with Swiss company Meyer Burger Technologies to obtain new sapphire cutting machines. Sapphire is currently used to protect the cameras on recent iPhones and the Touch ID fingerprint sensor on the iPhone 5s, but expanding its use to include display cover glass would necessitate a massive increase in sapphire production.

Sapphire has been seen as a potential successor to high-strength glass for display covers, although Corning claims that its Gorilla Glass 3 outperforms sapphire at lower cost. Apple has reportedly experimented with sapphire display covers at one point and found them infeasible, but improvements in the material and production technologies since that time may have convinced the company to revisit the possibility.

Jack Delgado
You know, it never made sense in the first place to construct glass out of gorillas. Constructing the glass out of sapphire seems like a notable improvement to me.
Score: 12 Votes (Like | Disagree)

FakeWozniak
With the glass being sapphire, does that mean the button will be diamond? :-)
Score: 11 Votes (Like | Disagree)

Looks like we may see something in the 2016-2017 time frame. It seems pretty obvious this will not be a quick and easy implementation. I'm interested to see what's at the end of that road.


Tight schedule, but I think there is still time to have something for Fall 2014 produced here.
Score: 6 Votes (Like | Disagree)

OK. I've never scratched my display as it is, but perhaps I'm in the minority. The display looks as good today as it did when I opened it 2.5 years ago, and I use it all the time. I guess what I'm saying is, for me, it ain't broke, so fixing it doesn't do much for me. *shrug*


Yes, Apple should make an exception and do a production run of ONE unit with the same screen as the current for you when they make the change :)
Score: 3 Votes (Like | Disagree)

everything-i
As they are talking about using very thin films of sapphire it could be bonded to the surface of soft shatter resistant glass to make a display that is both shatter proof and scratch proof which is the holy grail for display glass. It will be interesting to see how this develops.
Score: 3 Votes (Like | Disagree)

So theoretically, what's the benefit to a sapphire display cover? More shatter-resistant? I haven't ever thought about the display on my iPhone. I don't know that using a new material that doesn't change much will be a huge selling point.


Sapphire is second only to diamond in scratch resistance.


I believe they were getting at the fact that diamond is the only thing more scratch resistant, and thus would start with the small home button, unfortunately diamond is too expensive thanks to sellers hoarding them in unbelievable quantities in vaults to keep the price high.
Score: 3 Votes (Like | Disagree)
Read All Comments

Monday June 21, 2021 7:17 am PDT by Hartley Charlton
Users appear to be underwhelmed by Apple's upcoming iOS 15 and iPadOS 15 updates, according to the findings of a new survey by SellCell. The survey asked 3,000 iPhone and iPad users, evenly split between men and women, aged 18 or over in the United States, what they thought of iOS 15, iPadOS 15, and the naming of the upcoming iPhone 13 lineup. Over 50 percent of all of the survey's...
Read Full Article • 332 comments