Yesterday, the State of Arizona and GT Advanced announced that Apple is building a new 700-employee factory in Arizona to make sapphire glass. Apple will contract with GT Advanced, with that company owning and operating furnaces and related equipment at the facility.

Back in April, Pocketnow went to GT Advanced's factory in Massachusetts to find out how sapphire displays are made. It's likely that the facility in Arizona will use a similar process, though we do not yet know what Apple will use the sapphire for. A safe bet would be the company's rumored smart watch product -- many luxury watches use sapphire glass because of its durability.

The process is relatively straightforward: a sapphire seed, about the size and shape of a hockey puck, is placed at the bottom of a single-use molybdenum barrel called a crucible. The crucible is then filled with a mixture of condensed corundum -a crystalline form of aluminum oxide- and a material called “crackle,” sapphire material left over from previous runs. The full crucible is then placed inside the furnace, where it sits atop the “finger,” a small liquid helium-cooled platform that prevents the sapphire seed from melting too early. The furnace is sealed, the air is evacuated, and the temperature is brought up to 2100 degrees Celsius to allow the materials to melt together. (The video says 2200, but that’s wrong. It’s 2100, for all you making-sapphire-at-home hobbyists.) The material is put through a series of cooling cycles over the next 16 or 17 days, during which time the sapphire slowly crystallizes from bottom to top. The end result is this: a 115kg cylindrical section of industrial sapphire called a “boule.”

The new factory is expected to use next generation, large capacity furnaces with an emphasis on lower cost, higher volume sapphire glass manufacturing.

Apple currently uses small pieces of sapphire glass -- which provides superior durability and scratch resistance to other forms of glass -- to protect the cameras on the iPhone and on the home button for the new Touch ID-equipped iPhone 5s. A report from earlier this year suggested that future smartphones may use sapphire, a crystalline form of aluminum oxide, instead of more traditional forms of glass. 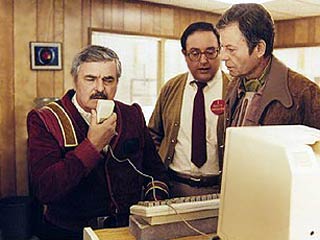 Quaint indeed now, with on-screen keyboards, and voice recognition and response. Scotty could actually converse with a Mac with dictation and voice commands, and iPhone's Siri. Majel Barret should have been the voice for Siri and Apple's Speech response. (Better than Siri or Vicki.)

Just imagine what another 30 years will do for technology... considering the last 30 years between the original 1984 Macintosh, and the ready-for-2014 iPad Air and next month's Mac Pro.
Score: 15 Votes (Like | Disagree)


I know, but one would think there are enough voice samples from Star Trek and other recordings, to create a reasonable digital facsimile of her voice-print, for her to live on in the culture, as the voice of actual computers, as well as the voice of fictional star trek computers.

Bowsa2511
This is pretty fascinating, I didn't even know they could make them artificially! Here I thought they had to mine sapphires and then press them into screens
Score: 2 Votes (Like | Disagree)

Apple can't go wrong getting into the use of sapphire. It is an incredibly versatile product. For one thing it is awesomely hard, far harder than Gorilla Glass. I've never had a problem with Gorilla Glass but it is used by everyone and using a superior ingredient is consistent with Apple quality. Helps differentiate the Apple brand as superior (yet again).

It transmits light across the entire spectrum with no distortion. That's why it is used in the scanners at checkout counters; almost no read errors.

Less known is it's non-optical possibility, as substrate for chip manufacture. It has a low conductivity rate for electric current but a high transmission rate for heat. This obviously would allow it to conduct heat away from high capacity processors.

IMHO this is one of the materials that will find greater and greater use in the types of products that Apple now builds and may build in the future. maybe a transparent iPhone in our future!
Score: 2 Votes (Like | Disagree)

Alphabetize
I'm not all that interested in keeping my screen scratch free, I'd really like my screen to be shatter resistant/proof instead.
Score: 1 Votes (Like | Disagree)
Read All Comments