Samsung's Galaxy Gear has not been selling well, according to a new report from BusinessKorea. First launched in September, the $299 smart watch has been purchased less than 50,000 times and has received largely negative reviews.

With daily sales reaching just 800 to 900 units, Galaxy Gear sales are falling below initial industry expectation, despite an aggressive marketing campaign from Samsung. 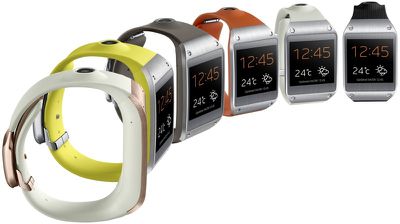 During Business Insider's Ignition conference in NYC, Samsung EVP David Eun spoke about the Galaxy Gear smart watch, lauding the company for being first to market and promising great things in the future. He compared the Galaxy Gear to a green tomato that would ripen over time.

It's a 1.0 device. I like it a ton. It's 1.0. Personally, I don't think enough people gave us the credit for innovating and getting it out there. Not easily done to integrate all this functionality into one thing. But I would also say over time this thing is going to get big and red.

While Samsung is the first major electronics company to come out with a smart watch aside from Sony, other tech companies, like Apple and Google, are also working on developing their own smart watch products which could compete with future offerings from Samsung.

Apple's iWatch is said to incorporate several health-monitoring functionalities, along with a full version of iOS. Recent rumors have indicated that it could come in multiple sizes, combating the bulkiness issue that plagued the Galaxy Gear.

Though Samsung's Galaxy Gear product is already on the market, Apple has reportedly opted to hold off on releasing its iWatch as the company works to solve battery life issues. The Galaxy Gear launched with a single day battery life, but Apple is aiming for a battery life of at least four to five days.

Apple is supposedly preparing to launch its iWatch in late 2014, and began filing trademarks for the product earlier this year. The company is also said to be focusing most of its resources on wearables, delaying its ongoing television plans.

Update: According to a report from Reuters, Samsung announced on Tuesday that it had sold 800,000 Galaxy Gear watches since the device's debut two months ago. Yonhap reports [Google Translate] that the 50,000 number referred to South Korea alone.

diddl14
Not bad for a product that is practically unusable.
Score: 39 Votes (Like | Disagree)

You may overtake Apple in a new market, but only after Apple has solidified it first ;)
Score: 35 Votes (Like | Disagree)

Menopause
Make "me first!" copycat crap, that's what you get.
Score: 30 Votes (Like | Disagree)

oplix
If they just waited for Apple, they would have sold a few million. Typical Samsung trying to Out-Apple, Apple.
Score: 29 Votes (Like | Disagree)

Ryth
I have a better analogy that relates to something that is small...but it's sure not ripe and sure is smelly.

Personally, I don't think enough people gave us the credit for innovating and getting it out there. Not easily done to integrate all this functionality into one thing. But I would also say over time this thing is going to get big and red.

This CEO is just a joke.

Your watch is an abysmal failure. You just put it out to try to beat Apple to it so you could have some legal recourse after you copy whatever Apple puts out and so you can saw "BUT WE DID IT FIRST...SEE SEE!!!"

Innovating? Are you kidding? Apple had this in their NANO years ago other then the link to the iPhone. You didn't innovate anything. You copied the NANO.

I hate Samsung so much.
Score: 26 Votes (Like | Disagree)
Read All Comments