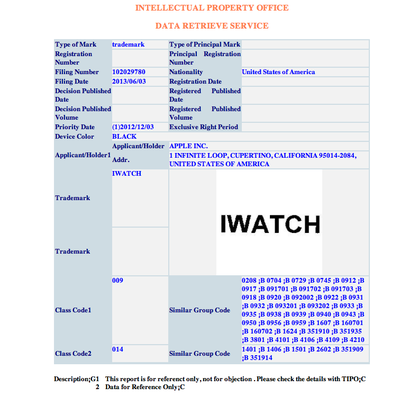 Apple's Taiwan Filing
In both iWatch trademark filings discovered today, Apple Inc. is listed as the company behind the requests and the company’s Infinite Loop address in Cupertino, California is included on the applications. The filing in Mexico was submitted via Mexico-based law firm Arochi, Marroquín, & Linder, S.C, which has worked with Apple on other product trademarks.

News of the iWatch, which is one possible name for Apple's rumored smart watch, first surfaced in late 2012 and was followed by a patent application for a wraparound-style “wearable video device” in February.

According to reports, Apple has a team of 100 product designers working on the watch, which may include a 1.5–2.0 inch OLED display along with biometrics, iPod nano touch technology, and the ability to interact with existing iOS devices.

While it has been suggested that Apple's smart watch could launch later this year, KGI Securities analyst Ming-Chi Kuo has instead targeted a late 2014 release date for the iWatch, suggesting that Apple is not quite ready to ramp up production for a 2013 debut.

Update: Apple also appears to have filed for an iWatch trademark in Turkey through Pinar Arikan, an attorney who has worked with the company in the past. While the filing does not list Apple as the applicant, it was filed on the same June 3 date as the other applications.

Update 2: Apple has also filed for the mark in Colombia and Chile.

Update 3: A tipster has also pointed us to a filing in India, bringing the total number of international filings discovered so far to nine, including the original December 2012 application in Jamaica that Apple is using to establish priority.

Rog210
They couldn't register it in the US, the NSA got there first.
Score: 32 Votes (Like | Disagree)

I think these tech companies are going to get a huge shock when they enter the wearable accessories market ... I kind of wish Apple wouldn't be the first in on this one, let the competition make the mistakes and bring out a brilliant product further down the track. 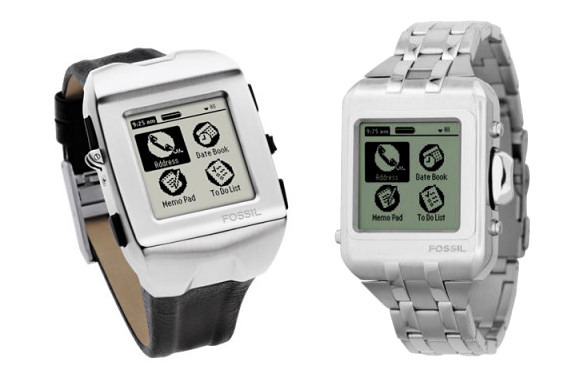 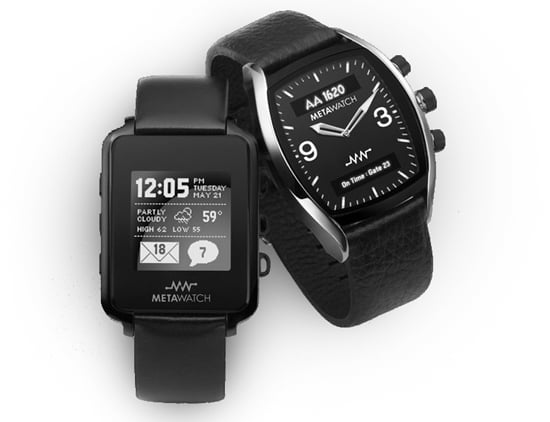 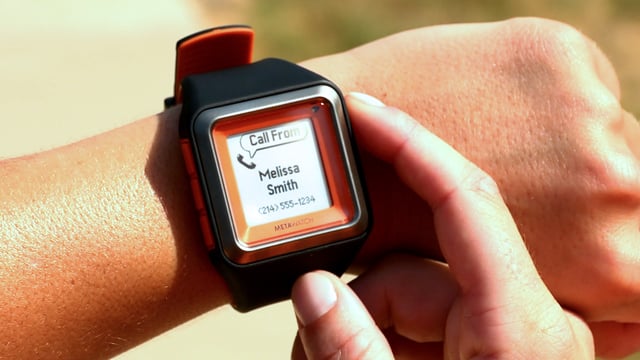 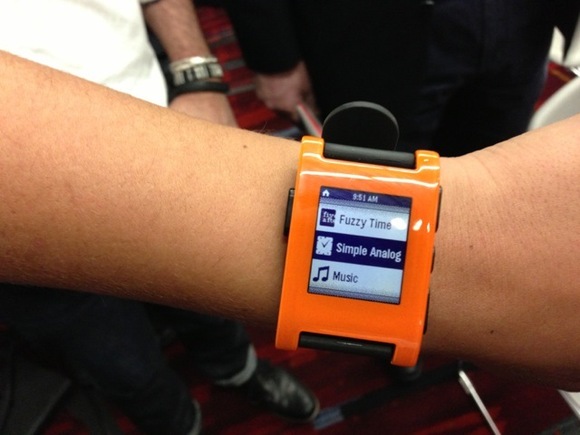 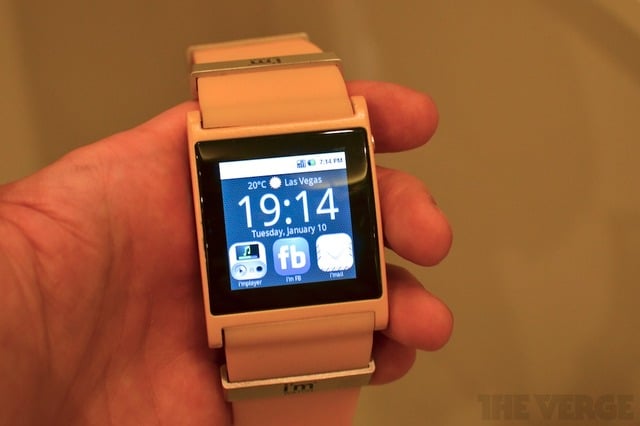 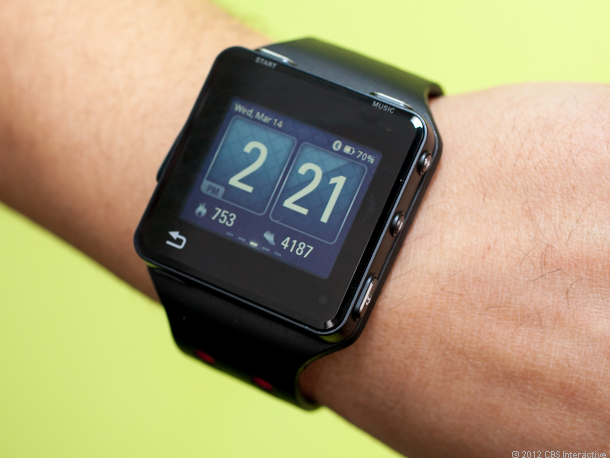 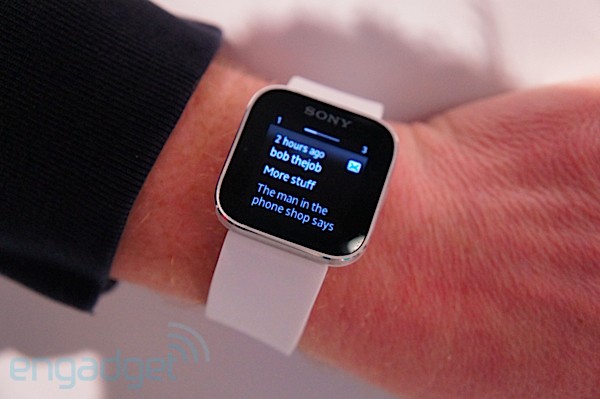 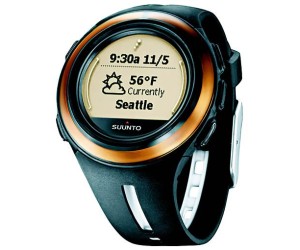 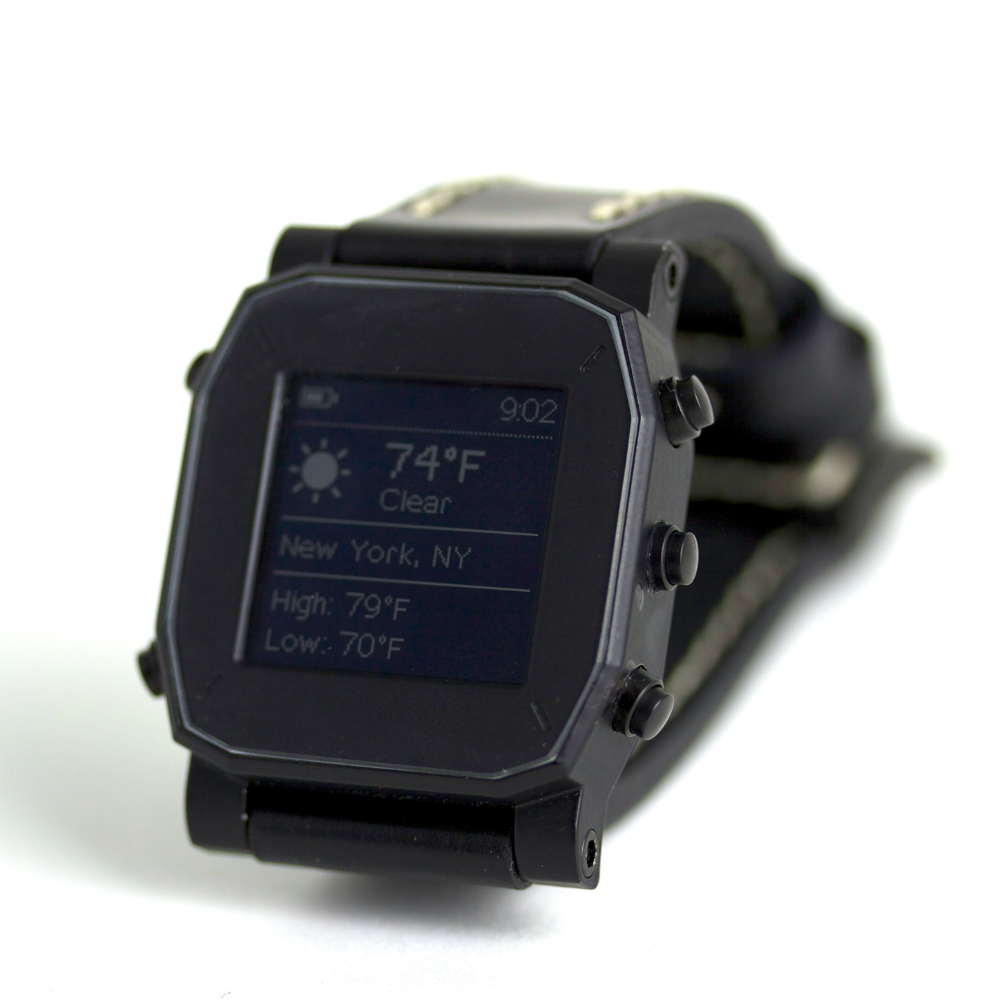 There has been a variety of unsuccessful smartwatches in the past. Nothing major but the situation is similar to the iPad and the pre-iPad "tablet PCs".

If the past repeats itself again, competitors following Apple in the smartwatch trend should still make mistakes in their first iterations and take like 2-3 years to catch up. That's enough for Apple to make some $ and secure itself the advantages associated with a good marketshare for the future (large app selection, third party accessories, content deals)...
Score: 15 Votes (Like | Disagree)

Currently, Apple largely targets these people who buy/wear $2,000 status symbols (and more realistically try $200,000+ status symbols). The iPhone is the absolute top of the range smartphone you can buy that has brilliant design and build quality. The iPhone is something celebrities and millionaires alike love to flaunt, because it's a stunning looking product. Same goes for all of Apple's current products.

These people love using iPods, iPads, iPhones, iMacs etc because they're the best things they can buy and they come with a sense of prestige. It's also why we all want the devices.

But I don't see Roger Federer walking around using his iPhone sporting the iWatch ... I think the iWatch is going to be targeting a very, very different audience than Apple's current target market and I don't think it's going to be anywhere near as successful because of this.

At least in the U.S., iPhones are not status symbols. Most middle-class people can afford them; they're nothing like high-end Rolexes.

And Apple targets average consumers, not millionaires and celebrities. They market themselves as the premium brand but not a luxury brand.
Score: 10 Votes (Like | Disagree)

Clubber
I wonder if the iWatch (watch as a verb) is the TV and the whole wrist thing (watch as a noun) was a massive curve ball thrown at the speculators. That'd be an awesome move. Not sure about an actual watch (as a noun) though, but I'll have to wait and see.
Score: 6 Votes (Like | Disagree)

ghsDUDE
If Apple does a good job at releasing this they'll be fine!
Score: 6 Votes (Like | Disagree)
Read All Comments