Apple has acquired Cue, a personal assistant app that was designed to aggregate information from email, contacts, and calendars into a daily snapshot, reports AppleInsider. MacRumors heard similar rumors about the potential acquisition several weeks ago, but we were unable to verify the claim. The deal has reportedly netted Cue (formerly known as Greplin) $40 to $60 million dollars.

In response to queries about the reports, Apple seemingly confirmed the acquisition to CNET and TechCrunch with its standard statement: "Apple buys smaller technology companies from time to time, and we generally do not discuss our purpose or plans." 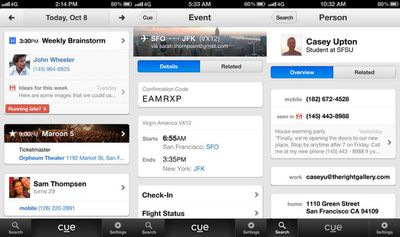 Cue turns your email, contacts and calendar into an intelligent snapshot of your day. All you need to create a Cue account is an email address. Then you can begin linking your Gmail, Yahoo Mail, Google Calendar, Facebook and all the other accounts that you depend on every day. Cue pulls these accounts together and uses sophisticated algorithms to create a personalized overview of the events and activities of your day.

Earlier this week, Cue unexpectedly shut down, posting a short note on its website letting users know that the Cue service is no longer available. TechCrunch speculated the shut down was likely the result of a sale due to the amount of funding Cue had raised. The app has since been pulled from the App Store.

Cue's aggregation functionality could potentially be built into a number of Apple products, including Siri. Apple’s iOS 7 Notification Center already offers a similar daily overview, pulling events and information from the Calendar, Weather, Clock, and Maps apps. The information is dynamic, shifting based on new events and location.

Apple has made a number of other acquisitions over the course of 2013, including Matcha.tv, AlgoTrim, Embark, HopStop, Locationary, and Passif Semiconductor.

Sky Blue
Eddy Cue will come to your house and help you out.
Score: 21 Votes (Like | Disagree)

Wouldn't it be cheaper for Apple to create their own "algorithm" internally?

Maybe, however there is a bit of PR here too. Buying the third party developers whose ideas they like looks a heck of a lot better than ripping off their ideas and killing them off.

There is also the recruitment, i.e. acqui-hire angle.
Score: 9 Votes (Like | Disagree)

Translation: When somebody does something better than us we just make them go away.

Or "When somebody does something better then us we recognize it and buy them instead of just taking their idea and litigating them out of business."
Score: 7 Votes (Like | Disagree)

MacRumors heard similar rumors about the potential acquisition several weeks ago, but we were unable to verify the claim.

BrianMojo
I love Apple products but Google Now is definitely currently out-classing Apple. This seems like a much needed catch-up in that space.
Score: 5 Votes (Like | Disagree)

Wouldn't it be cheaper for Apple to create their own "algorithm" internally?


I think that by having more than 100 billion dollars in bank those 50 millions are nothing.
As Cook said, the most important resource are talented people.
Score: 5 Votes (Like | Disagree)
Read All Comments