The expansion project at the Florida Mall Apple Retail Store that will see the store more than tripling in size has been in the works for more than a year. A tipster has sent us this image of the black paneling showing where the new store will be inside the mall.

Apple is reportedly planning to have the store open by the end of July or beginning of August. 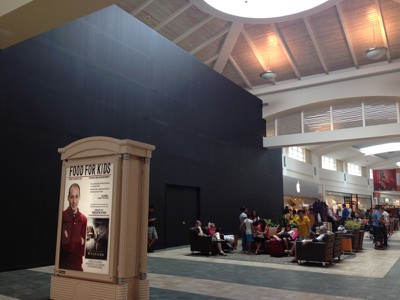 The leasing plan for the mall [PDF] shows the expansion in progress, with a Microsoft store located right next door to Apple in part of the space vacated by Williams-Sonoma and Pottery Barn. The newly expanded Apple Store will be twice the size of the Microsoft retail store, which opened last August.

IFO Apple Store has additional information about the expansion from a post last year:

The Apple store opened in September 2005 with about 2,700 square-feet, now a considered a small space for the large number of daily visitors. According to insiders, the Williams-Sonoma and Pottery Barn stores will soon vacate, although it’s unknown if they’re relocating to other spaces in the mall or closing completely. Shortly after, construction will begin to expand the 30-foot wide Apple store into a portion of the adjacent vacant space. Mall lease plans suggest the finished store will have a 90 foot-wide storefront with 8,640 square-feet.

As Apple has covered much of the United States with retail stores, in recent years the company has been focused on expanding existing locations rather than building out new ones.

You do realize that your looking at the construction cover and that once it's complete it will come down and match the rest of the existing storefront? It's there so u can't see inside....


Whoooosh. That was the 2:12 Sarcasm Express zooming right past your stop. Catch the next one? ;)
Score: 10 Votes (Like | Disagree)

TWSS37
Wow - this is beautiful. I can't believe Apple is moving away from the full glass frontage to an all black, opaque storefront. Bold move, but one I believe that will pay off and usher in a new era of modern architecture.
Score: 10 Votes (Like | Disagree)

You do realize that your looking at the construction cover and that once it's complete it will come down and match the rest of the existing storefront? It's there so u can't see inside....


Apple has revolutionized in-store security as well with the matching black doors you have to manually open using a doorknob![COLOR="#808080"]

Whoooosh. That was the 2:12 Sarcasm Express zooming right past your stop. Catch the next one? ;)


I'm usually good at tagging my sarcasm but I didn't really think it was needed on that one :)
Score: 4 Votes (Like | Disagree)

As Apple has covered much of the United States with retail stores, in recent years the company has been focused on expanding existing locations rather than building out new ones.

Makes sense. Do not follow Mickey Drexler's business model when he was GAP CEO. During his time with GAP, its "Old Navy", "GAP" and "Banana Republic" presence more than tripled, with "GAP" stores almost as common as "Starbucks". The growth didn't match the company's retail sales and soon the stock tumbled and stores closed. Expanding current location size is better business than opening more stores. Slow and steady, it wins the race. :)
Score: 4 Votes (Like | Disagree)

Wow - this is beautiful. I can't believe Apple is moving away from the full glass frontage to an all black, opaque storefront. Bold move, but one I believe that will pay off and usher in a new era of modern architecture.

Wow - this is beautiful. I can't believe Apple is moving away from the full glass frontage to an all black, opaque storefront. Bold move, but one I believe that will pay off and usher in a new era of modern architecture.


It scratches. Trust me, I live in Orlando and rubbed my keys against it. I hear it's a problem in other Apple product lines.
Score: 2 Votes (Like | Disagree)
Read All Comments

Wednesday August 5, 2020 12:56 pm PDT by Joe Rossignol
One of the biggest new features of iOS 14 is Home Screen widgets, which provide information from apps at a glance. The widgets can be pinned to the Home Screen in various spots and sizes, allowing for many different layouts. When the iOS 14 beta was first released in June, widgets were limited to Apple's own apps like Calendar and Weather, but several third-party developers have begun to test ...
Read Full Article • 32 comments

Tuesday August 4, 2020 11:14 am PDT by Juli Clover
Apple today released the fourth developer betas of iOS and iPadOS 14 for testing purposes, tweaking and refining some of the features and design changes included in the update. Changes get smaller and less notable as the beta testing period goes on, but there are still some noteworthy new features in the fourth beta, which we've highlighted below. - Apple TV widget - There's a new Apple TV...
Read Full Article • 86 comments

Monday August 3, 2020 3:14 am PDT by Tim Hardwick
Apple last week confirmed that its "‌iPhone‌ 12" launch will be delayed this year due to the ongoing global health crisis and restrictions on travel. Apple last year started selling iPhones in late September, but this year, Apple projects supply will be "available a few weeks later," suggesting a release sometime in October. We're expecting a total of four OLED iPhones in 5.4, 6.1, and...
Read Full Article • 95 comments

Thursday August 6, 2020 8:13 am PDT by Hartley Charlton
An image supposedly of an iPhone 12 display unit has been shared online by leaker "Twitter user Mr. White". Compared to images of an iPhone 11 Pro display piece, this new unit has a reoriented display connector, reaching up from the bottom of the display, rather than from the left-hand side on iPhone 11 Pro. This may be due to the logic board moving to the other side of the device. A...
Read Full Article • 54 comments

Wednesday August 5, 2020 1:45 pm PDT by Juli Clover
Google this week launched its newest smartphone, the $349 Pixel 4a, a low-cost device that's designed to compete with other affordable devices like Apple's iPhone SE. We picked up one of the new Pixel 4a smartphones and thought we'd check it out to see how it measures up to the iPhone SE, given that the two devices have such similar price points. Subscribe to the MacRumors YouTube channel ...
Read Full Article • 128 comments

Saturday August 1, 2020 3:43 pm PDT by Frank McShan
Apple in March purchased weather app Dark Sky, and at that time, Dark Sky's developers said that the app's Android version would be discontinued on July 1, 2020. However, instead of shuttering the app on that date, the app's developers announced that the discontinuation would be delayed for another month. Now that it's August, Android users are no longer able to access the app, and...
Read Full Article • 133 comments

Wednesday August 5, 2020 10:07 am PDT by Juli Clover
Samsung today held a virtual Galaxy Unpacked event where it unveiled its next-generation smartphones that will compete with Apple's 2020 iPhone lineup, set to come out in the fall. Samsung announced the launch of the Galaxy Note 20 and the Galaxy Note 20 Ultra, the two newest devices in the Note lineup, and, more notably, the Galaxy Z Fold 2, Samsung's latest foldable smartphone. The...
Read Full Article • 201 comments

Wednesday August 5, 2020 4:39 am PDT by Tim Hardwick
New images shared on Weibo appear to show a circular array of magnets housed inside an "iPhone 12" chassis. The unverified images depict 36 individual magnets in a circular arrangement, suggesting they could be related to mounting or charging. EverythingApplePro, who shared the Weibo-originating images on Twitter, also posted an image of an alleged iPhone 12 case with a similar array of...
Read Full Article • 58 comments