Taiwanese blog Apple.pro, which has on a number of occasions discovered photos of parts from upcoming Apple products, has shared a new photo [Google translation] of what is claimed to be the front panel and digitizer assembly for the upcoming fifth-generation iPad. 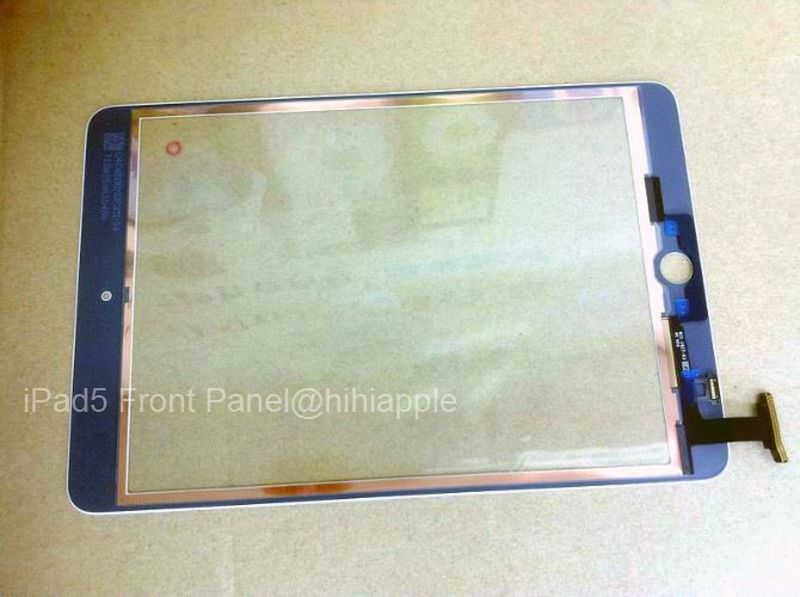 The photo, which was posted to a Photobucket account, shows the rear of the part and includes the ribbon cable for the digitizer. Photos of the front of a similar part leaked last month, and both parts are consistent with claims that the upcoming iPad will see a redesign taking inspiration from the iPad mini with narrower side bezels.

It is possible that this could simply be an iPad mini part, but it does appear to be a slightly larger version of that part, appropriate for the full-size iPad with its 9.7-inch display.

Update 7:37 AM: French site NowhereElse.fr has discovered [Google translation] that the photo is actually an iPad mini part, taken from a Chinese part vendor's website.

KylePowers
Well now I'll be torn on whether to get this redesigned iPad 5 or iPad Mini with Retina :(
Rating: 4 Votes

Raftysworld
Does it look kind of fat to anyone else?
Rating: 3 Votes

KrazyBear15
iPad Mini design for the full sized iPad is much needed. iPad needs to slim down and drop some weight, looking forward to purchasing my first iPad!
Rating: 3 Votes

Oh wallet, how horrible I feel for you this year.
Rating: 2 Votes

Technarchy
Software is the concern for me. Not hardware.

WWDC is what I'm focused on currently.
Rating: 2 Votes

Having said that, we don't know quite how much weight they are shifting off the new device, perhaps it will be comfortable (light) enough to hold it from the bottom in portrait mode.


Even if the weight didn't change, being smaller will make it easier to hold, as there is less of the device hanging past your fingers and levering against your thumb. :apple:
Rating: 1 Votes

AppleMark
Hard to see why this will not happen. Will need to be lighter with that form factor.

However the issue I have with my iPad mini is interfering with the OS or App through touching the screen where the bezel is thinnest whist in use.
Rating: 1 Votes

This is my concern as well, I think Apple have convinced themselves that that 'thumb rejection' software in the mini is good enough to migrate to the full size iPad. I can't say I'm looking forward to covering the screen with my thumb on the new one though.

Having said that, we don't know quite how much weight they are shifting off the new device, perhaps it will be comfortable (light) enough to hold it from the bottom in portrait mode.


Let's hope so. The current one is way too heavy.
Rating: 1 Votes

i'm really not a huge fan of losing the thumb bezel. The 10" is two large to comfortably hold without some amount of grip.


Maybe it will be light enough to hold with the thin bezel. We will see...;)
Rating: 1 Votes
[ Read All Comments ]