Apple today increased its promotion for the upcoming milestone of 50 billion downloads from the App Store, an event the company is marking with a contest in which the person who downloads the 50 billionth app will receives a $10,000 iTunes Store gift card while the next 50 downloaders will receive $500 gift cards each. 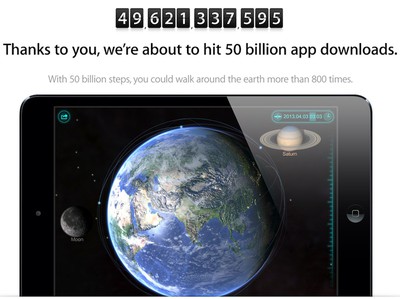 The milestone is now being promoted as the main feature on Apple's front page, with an animated counter being accompanied by a rotating series of iPad mini app photos with associated facts to put the "50 billion" number in perspective:

MasterHowl
I would literally cry with happiness if I won a $10,000 iTunes Store gift card. I'd never have to spend another penny on music again!
Score: 16 Votes (Like | Disagree)

You can always tell what is the absolute finest quality by how many items get sold.

You want the finest hamburger? McDonalds sells billions, so they must be the best!

You want the finest computer OS? Windows sells billions, so it must be the best!


That is the only way that this campaign makes any sense whatsoever. Apple has brilliant marketing! /s
Score: 3 Votes (Like | Disagree)

TouchMint.com
Cant wait for one of my apps to be downloaded as the 50 billionth app. =) What a promo that would be!
Score: 3 Votes (Like | Disagree)

You can always tell what is the absolute finest quality by how many items get sold.

You want the finest hamburger? McDonalds sells billions, so they must be the best!

You want the finest computer OS? Windows sells billions, so it must be the best!


That is the only way that this campaign makes any sense whatsoever. Apple has brilliant marketing! /s


Or you know, they are just pinting out a milestone. I don't think they mention anywhere how "quality" the apps are. Just that the store is hitting a big milestone for them. What is the big deal?
Score: 2 Votes (Like | Disagree)

samcraig
I would almost bet 10K that the app named as the 50 billionth will not be a Google app. Or a Samsung one.
Score: 2 Votes (Like | Disagree)
Read All Comments