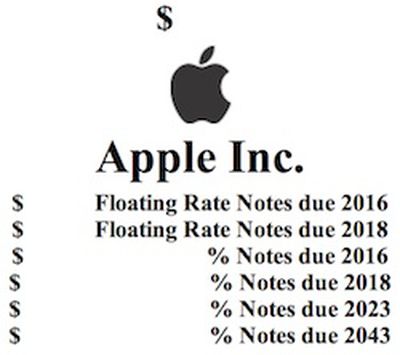 Following up on yesterday's initial filing from Apple addressing the company's efforts to issue a bond offering to raise cash in support of its stock buyback program, the company today filed a prospectus with the Securities and Exchange Commission outlining its general plans, which include six different chunks of debt with staggered maturities. The Wall Street Journal has more on Apple's prospectus and other details being revealed in one-on-one meetings with potential investors:

The Apple deal comprises six chunks of debt, according to a regulatory filing from the company. Four tranches of fixed-rate debt are being offered in the form of three-, five-, 10- and 30-year paper. Rounding out the deal are two tranches of floating-rate debt, comprised of three- and five-year notes.

The Wall Street Journal indicates that Apple has not yet announced exactly how much money it intends to raise with today's offering, but that Apple is expected to offer "more than $10 billion" worth of bonds. Reuters cites a higher figure of $15-16 billion, which would rank the deal as one of the largest investment-grade bond offerings in history.

While Apple holds approximately $145 billion in cash and investments, roughly two-thirds of that money is currently held in foreign countries and would be subject to significant taxes if it were to be returned to the United States. As a result, Apple has elected to keep that money offshore and instead rely on relatively cheap debt to fund its capital return program, which consists primarily of a major stock buyback program and a quarterly dividend. Apple's current plan involves spending $100 billion to return capital to investors by the end of 2015.

Update: Reuters reports that the order book for Apple's bond offerings has now topped $40 billion, meaning that investors have offered bids for more than twice the amount of debt Apple is expected to issue. The oversubscription gives Apple flexibility in finalizing interest rates and amounts to be raised and indicates very strong interest in Apple's offerings.

Update 2: Bloomberg reports that Apple will sell a total of $17 billion worth of bonds.

keysofanxiety
I don't know why, but the idea of Apple borrowing money to do this just doesn't sit right with me. That was one of the things Jobs was most proud of- no debts for the company. And let's face it, the stock buyback program is predominantly to artificially increase the stock value of AAPL -- unless there's something I'm missing (I don't profess to understand how this works, so forgive me if this comment is a bit naive!)
Score: 16 Votes (Like | Disagree)

italynlprkn
Anyone saying that this is the beginning of the end, or that Jobs wouldn't have wanted it, should take a finance class.
Score: 15 Votes (Like | Disagree)

mostlydave
It makes me sick that one of America's most valuable companies is allowed to pull this crap instead of just paying taxes on earned income.
Score: 12 Votes (Like | Disagree)

abhishake
Leverage is like cocaine - makes the good times better and makes the bad times worse.
Score: 12 Votes (Like | Disagree)

I don't know why, but the idea of Apple borrowing money to do this just doesn't sit right with me. That was one of the things Jobs was most proud of- no debts for the company. And let's face it, the stock buyback program is predominantly to artificially increase the stock value of AAPL -- unless there's something I'm missing (I don't profess to understand how this works, so forgive me if this comment is a bit naive!)


What they're "banking" on (get it?) is the price of the stock to go up creating pretty much free money without doing anything. If the stock price drops after the stock repurchases, however, the leverage will cost them even more. This is showing how confident Apple is with AAPL.
Score: 10 Votes (Like | Disagree)

Muscle Master
Why can't they support the American economy and pay.. ALL they taxes. bring the cash back to the USA
Score: 9 Votes (Like | Disagree)
Read All Comments

Sunday September 25, 2022 6:50 am PDT by Sami Fathi
Apple may decide to release its remaining products for 2022, which include updated iPad Pro, Mac mini, and 14-inch and 16-inch MacBook Pro models, through press releases on its website rather than a digital event, according to Bloomberg's Mark Gurman. In his latest Power On newsletter, Gurman said that Apple is currently "likely to release its remaining 2022 products via press releases,...
Read Full Article • 153 comments