Original iPhone Will Soon Be 'Obsolete' In Apple Retail Stores

The original iPhone will soon be considered obsolete in Apple Retail Stores according to an internal Apple document shared by 9to5Mac. Products considered 'obsolete' are ineligible for service parts and documentation at retail stores and cannot be repaired at mail-in AppleCare Repair Centers.

Apple typically makes products 'obsolete' or 'vintage' five years after they are discontinued, though there are some exceptions where required by law. The original iPhone went on sale in June 2007 and was discontinued in July 2008 when the iPhone 3G was released. 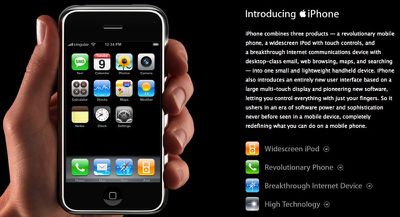 Other Apple products that will be considered 'vintage' as of June 11, 2013 include the mid-2007 models of the iMac, the late 2006 model Xserve, and the original Mac Pro. 9to5Mac has the list of newly minted vintage and obsolete products, while Apple maintains a list of all products named vintage or obsolete going back to the Apple II.

This phone was revolutionary. There were none like it ever before.

Now we got Tim Cook.


The problem with the Tim Cook bashing is that you don't seem to understand how CEOs really work. Steve Jobs was an exception. The CEO isn't supposed to innovate. They're supposed to run the day-to-day business end of things. Cook is perfect for what he's supposed to be doing. It's Jonny Ive's job to innovate.
Score: 57 Votes (Like | Disagree)

ybz90
A handheld device that's over 6 years old is considered obsolete by the manufacturer. Exactly 0 people in the entire world are surprised by this "news".
Score: 19 Votes (Like | Disagree)

The problem with the Tim Cook bashing is that you don't seem to understand how CEOs really work. Steve Jobs was an exception. The CEO isn't supposed to innovate. They're supposed to run the day-to-day business end of things. Cook is perfect for what he's supposed to be doing. It's Jonny Ive's job to innovate.

I still remember that warm June day. It was truly magical. Everyone and I mean EVERYONE wanted one of those phones. Something like 75% of all Americans new the iPhones release date - andApple had a $0 marketing budget for it.

Dark Dragoon
I have the original iPhone which I purchased the day after launch in the UK back in November 2007. I've yet to upgrade and have used the phone every day since, I think it may only have been turned off for a maximum of a few hours at a time for things like exams many years ago.

Some of the more amusing moments recently have been when people ask if it's the new iPhone, I guess they had forgotten what the 2G looked like.

The only part thats failed on the phone is the headset which I had replaced once under warranty, the current one has also stopped working. The phone has also never been in a case, though I've been careful with it over the years, so it's still in good condition, no scratches on the screen and only one hard to see dent on the back. The chrome strip around the screen is looking a little worn though.

So whats it like for my day to day use.

Overall its slow and there are no new apps or updates for it, but it still works fine. The most frustrating thing is that older versions of the apps are not available so apps that used to work fine on it can no longer be purchased or downloaded for it.
The battery life is still not bad, I leave everything turned on (WiFi, Bluetooth, Location, Notifications), and charge the phone at night so it's good for the next day. Though this isn't completely necessary as it will run for a good few days of light usage.
The lack of 3G is annoying but most places I go have WiFi. The lack of GPS is another issue, though not one that I'm that bothered by.

As well as the original iPhone I also have an Apple Bluetooth Headset to go with it, the battery life on the headset isn't that great any more but it does the job, though I rarely use it.


When I first bought the phone I said I would use it until it broke, was lost, or the battery life became so bad that it's unusable. It isn't that time yet though probably soon it will be. I've watched the release of every new iPhone since, where I've been pretty excited to see it but decided not to buy as it either wasn't a big enough change (the earlier models) or was out of my budget especially as my phone still works (newer models).
Score: 12 Votes (Like | Disagree)
Read All Comments