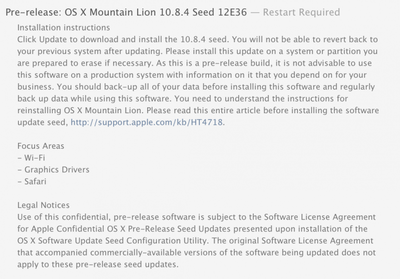 Apple continues to ask developers to focus on Wi-Fi, Graphics Drivers, and Safari.

The update is available through the software update tool in the Mac App Store and Apple's Developer Page.

cmChimera
Another beta, another thread of people whining about OS X.
Score: 8 Votes (Like | Disagree)

I'm a dev with seed access and I can't decide if it's worth downloading this or not. I wish they'd be more specific about changes.


If you're a dev, wouldn't it be worth it to test your software with every beta?
Score: 7 Votes (Like | Disagree)

I highly doubt it take a substantial amount of resources to include Facebook integration in an app. Accordingly, I doubt it has a substantial effect on development of this software. Yawn.

It's likely that Macs will 802.11ac this year. That's pretty early adoption.

Baseless. And as of a result, they had two OS release the same year, and everyone was happy. This practice is not uncommon, and happened LONG before you are claiming things went to hell. So shouldn't that be a sign that Apple is acting as it always acted? Is there anything credible to support any of this?

As Windows struggles to get notification center, and has switched to a yearly model just to keep up...Yeah. Seems legit.

"Yawn" and "baseless" replies with little to no sources to support such as opposed to the sources I referenced to support my claims comes across as disrespectful and pointless. I did not disrespect your comments and opinions with similar remarks, instead I respected and acknowledged your comments and responded with respectful and supported claims whereas your responses are personal and lack merit as they are opinion based.

As for Serlet, it's already widely known that many at Cupertino did not agree nor respect Scott Forstall's influence. Cue and Mansfield being the most vocal, and Serlet's departure was in part due to his frustrations with Forstall's influence over OS X development. If you need sources, Google is a good place to start. Scott Forstall's firing alongside S.V.P. of Retail John Browett's short lived tenure (April-Oct 2012) was a long time in coming and one reason why Bob Mansfield decided on delaying his retirement that was announced earlier in 2012. In fact, MacRumors covered this last November:

There's a source to back that claim right off this site :)


Lastly, as I have not respond disrespectfully, it is not unreasonable to expect a mature and cordial response. As such, unless you wish to continue this respectfully or in PM's, nothing more needs to be addressed, especially at the expense of members who wish to engage in informative and cordial exchanges. Otherwise, it seems juvenile. :)
Score: 5 Votes (Like | Disagree)

Okay, yes, there are a tiny amount of people who do these sorts of things. I'm just saying that 80% of complaints would die out if they worked on those areas.

As well, those "complaints" of iOS and social media integration have merit as they have been focusing much of their software engineering on those features with less focus on OpenGL and improved graphics support (these beta's address such but as a developer there has been little momentum in advancements). Pro-Apps such as Aperture and Final Cut Pro X even have Facebook integration. Many threads with professional photographers address the frustrations regarding Apple's lack of pro-apps aside from social media integration which most do not use as it leads to little business aside from people "liking" their page and asking for free head-shots or work. This has been a contention with those of us who have used pro-apps for years for work. Adobe has picked up in the pro department, their latest Lightroom release is winning praise from photographers as many are leaving Aperture due to Apple's neglect for Adobe CS6. A few years ago this would have been laughed at as Apple was doing well.

Those who claim the pro-market is "niche" are now eating those words as Apple stock is tumbling and a large amount of the pro-market has switched to other platforms and pro-apps. While not a large market as the consumer market, the consumer market has become over saturated, and growth (outside of China which has proven difficult for Apple to tap into) is flatlining. The pro-market has bank, a lot of, and much of that goes into updating hardware and software licenses. Doing the math, that "niche" market is still a large percentage profit wise when studios and businesses have tens if not hundreds of thousands to spend on upgrades. That isn't chump change.

HFS+ is long in the tooth, especially as large volumes and servers are becoming commonplace in the average home (shame ZFS licensing fell to the wayside as Apple did explore ZFS in Leopard beta's, which would have improved OS X use of large volumes such as Time Machine and media storage). My parents even have a Synology DS212j with a Mac Mini as their HTPC. Linux based, which means OS X has to use SMB or AFP to access media outside of Synology's Assistant app. 10.7 had the worst revamp in network protocols, much of which was remedied with 10.8 but still needs some improvements. A good deal would be facilitated by quicker adoption of wireless ac. Apple was ahead of the game when they adopted Wireless-N years ago before many big players, what is keeping them from being ahead of the curve in wireless ac hardware and supporting kexts? This is a deviation from OS X advancements that made OS X a better OS.

I'm not disagreeing with you in the least, you have some very valid points that I absolutely recognize. Social media, whether fad or not, is a big market and Apple is wise in integrating such into their main products. However, much of Forstall's influence in Apple was strong arming OS X engineers into further iOS integration at the cost of a more stable and advanced OS X. Recall that Leopard was delayed (http://appleinsider.com/articles/07/04/12/apple_delays_leopard_release_until_october) a few times as iOS development pulled OS X engineers away. Apple is notorious for hiring cross platform engineers and keeping a small team as Jobs wanted to know everyone on the teams and keep a tight hold on those engineers. This was one of many factors that lead to Serlet leaving and Federighi taking over OS X software engineering with 10.7. 10.6 Snow Leopard was (arguably) one of the most polished OS X releases to date. Serlet became increasingly frustrated with engineer focus on iOS and Forstall's influence over Jobs. Serlet had little to do with 10.7 Lion, that was Federighi's baby. We all know how that went.

I know first hand this has been happening with OS X. It is a shame as past OS X updates were generally ahead of the curve, that has absolutely changed since 10.7.
Score: 5 Votes (Like | Disagree)