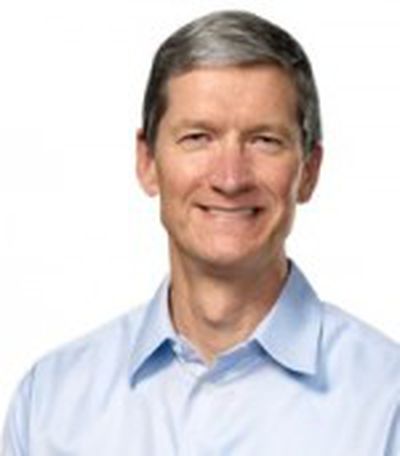 Following yesterday's record-breaking earnings numbers for the first fiscal quarter of 2013 that still fell short of analyst expectations, Apple CEO Tim Cook has sent out an email to employees (via 9to5Mac) congratulating them on the performance and announcing an employees-only town hall meeting scheduled for today.

We’ve just reported another record setting quarter, thanks to everyone’s incredible hard work and focus. We sold over 75 million iOS devices in the holiday quarter alone, which is a testament to the strength of Apple’s innovation. Please join me for an employee communications meeting tomorrow at 10 a.m. Pacific time in the auditorium of De Anza 3. We’ve created a space on AppleWeb where you can submit your questions in advance, and we’ll do our best to answer as many of them as we can during the meeting. The meeting will be broadcast live throughout Cupertino and at many other Apple locations. Please check AppleWeb for details.

Apple has held similar meetings in the past, with discussion at last year's meeting reportedly focusing on the company's philanthropy and also including an announcement of a new hardware discount program for company employees.


A good company is one that makes good products, makes money, doesn't lay off employees, and has happy employees.

The stock market doesn't think so. They think a good company is one who projects astronomical growth for the future irregardless of whether they have a sound business plan that makes sense, and irregardless of how much money they are making TODAY. It's all smoke, mirrors and HOPE.

Good, solid companies are shunned, because why put your money into something steady and make 5% on your money year over year? Let's bet the farm and make 100-200% every 3 months! Get rich quick!

That's the sad state of the stock market now.
Score: 20 Votes (Like | Disagree)

iAco
They had a winning quarter-over-quarter for a while now. How come the congratulations comes now? Oh snap! It's because Apple's stock is heading south and it will be the last stunning quarter from Apple for a while.

What a way to juice your employees.

Too bad in the end Google will dominate the world with marketshare and data and services that are just a little more useful then hardware build by folks with OCD. But don't get me wrong, I love the shiny toys!
Score: 10 Votes (Like | Disagree)

There always comes a time when the slope of growth on the chart becomes just too steep to maintain. A giant company with centralized, consolidating management instead of decentralized, delegating management (creating lots of little Steves instead of reducing the decision-makers at the top and giving them even more responsibilities) becomes bottlenecked by the maximum production of the few at the top. I suspect Apple is grappling with this right now.

I recall reading time and again that just about everything of consequence at Apple had to go through Jobs. That can work when the company is small. But when you're the biggest company in the world, you need too many decisions made for any one guy (or a handful of guys) to keep pace with the needed growth. I was worried with the recent announcements about Exec departures and consolidation of power & responsibility when I believed (and still do) what Apple needs is delegation and decentralization, leveraging it's "best & brightest people in the world" in a way more suitable for the big company that is Apple now rather than the small/shrinking company it was in 1997.

In very simple and narrow terms: we celebrated when Ive was given the added responsibility of software design. Given the great job he's done with hardware design, it seems like a great idea. But one could also see it like this: he used to be able to give 100% of his focus to hardware design. Now, he might split it- 50% to hardware, 50% to software. If so, hardware gets half the focus it used to get because now he's got to give the other half to software design. The same applies to other consolidations of power & responsibility with other leaders. Is that actually a good thing (when Apple obviously needs more "next big thing" rollouts than less)?

Sure these managers have legions of employees who do most of the work. But the trick is that too much decision-making consolidated at the top can have legions waiting for decisions rather than rolling on with "next big thing" creations. When the very few hold too much of this decision-making responsibility, they are the bottlenecks to ongoing, robust growth.

Apple needed a "next big thing" rollout on par with iPhone (2007) and iPad (2010) last year (2012). That didn't happen. Instead, it was just refinements of old "next big things". There better be something genuinely new (not a thinner, lighter, or different color, old NBT) this year or I suspect AAPL stock will feel even more pain. In short (and IMO), the old NBTs are not strong enough to maintain the growth slope on their own. They need a new NBT (that is not a Mac or new iDevice) to become a major source of new revenues & profits. It needed to hit in 2012 but didn't (and thus AAPL from $700 to about $460 in just the last few months).
Score: 7 Votes (Like | Disagree)

Simple... Apple didn't meet sales targets, esp on iPhone 5. Profit margin was down. Investors don't see anything to fuel additional growth. Shorter: Apple needs a new "big thing" product for the stock to break out on the upside again. Cook needs to deliver.

So because Apple doesn't meet a bunch of analysts who can't tell their you know what from their head, that's Apple's fault? Same analysts that haven't addressed Q4 was 1 week shorter?

The iPhone 5 was constrained by supply. Any other company would wet their pants to have 2 products that they cannot keep stocked on the shelves and Wall Street would reward those companies. iMac was down because of display yields...not because of demand.

..there...now after that has sunk in to those that just don't get how substantial and mind blowing that is...
Apple still...

-Sells more iPhones in 1 quarter than did Samsung of their whole S series in 1 year.
-Cannot meet enough demand for 2 of it's products due to popularity.
-Adds 16 billion to the cash.
-Moving into China where growth is enormous.
-PC sales are down showing that tablets are all the majority need. Growth into PC % is huge.
-Quarter was 1 week shorter then last year.

There is plenty of growth potential. The issue is that Wall Street treats Apple differently.

But hey...Wall Street uses rational/logical analysis right? I mean...Google jumps $50 after losing 6% in ad revenues and $1.5B in sales revenues from a hardware business they should have never bought in the first place.

When Apple moves into Google/Androids sandbox in China and starts taking market share from them, the analysts will reward Google with something to the tune of "Well heck, that only means Google now has growth potential...buy buy buy" where if it was Apple and they lost any % points, they would go "Look at how much share Apple is losing..sell sell sell"
Score: 6 Votes (Like | Disagree)
Read All Comments

Wednesday January 26, 2022 8:56 am PST by Joe Rossignol
Benchmark results have started to surface for MSI's new GE76 Raider, one of the first laptops to be powered by Intel's new 12th-generation Core i9 processor. Intel previously said that its new high-end Core i9 processor is faster than Apple's M1 Max chip in the 16-inch MacBook Pro and, as noted by Macworld, early Geekbench 5 results do appear to confirm this claim, but there are several...
Read Full Article • 294 comments

Tuesday January 25, 2022 3:31 pm PST by Joe Rossignol
Dropbox today announced that users who update to macOS 12.3 once that software version becomes available may temporarily encounter issues with opening online-only files in some third-party apps on their Mac. In a support document and an email to customers, Dropbox said it is actively working on full support for online-only files on macOS 12.3 and will begin rolling out an updated version of...
Read Full Article • 62 comments

Thursday January 27, 2022 12:08 pm PST by Juli Clover
Apple today seeded the first betas of iOS 15.4, iPadOS 15.4 to developers for testing purposes, adding a slew of new features to the latest iOS operating systems. iOS 15.4 is the biggest update that we've had to iOS 15 to date, and it brings Universal Control, Face ID with a mask, new emojis, and tons more. Face ID With a Mask With iOS 15.4, there is now an option to unlock your iPhone...
Read Full Article • 68 comments

Wednesday January 26, 2022 6:00 pm PST by Juli Clover
Apple is working on a new payments service that will allow iPhones to accept payments directly on device with no additional hardware, reports Bloomberg. Right now, iPhones can accept credit cards with add-ons like the Square Reader, but Apple's new technology will eliminate the need for a third-party product. Individuals and small businesses will be able to accept payments with the tap of a...
Read Full Article • 139 comments