Today would have been Steve Jobs' 57th birthday, and a number of Apple fans are taking the opportunity to commemorate his life and legacy, with the topic currently appearing on Twitter's list of top trending topics worldwide. 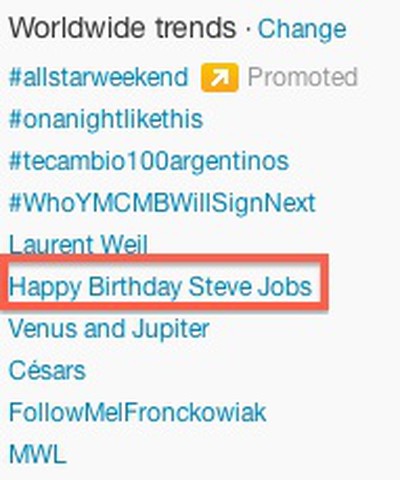 Jobs passed away on October 5, 2011 following a long battle with pancreatic cancer.

A pair of Apple fans in New York City are planning a party in Jobs' honor at outside Apple's flagship Fifth Avenue store in Manhattan.

To fete what would have been Jobs’ 57th birthday, dancers will gyrate to Bob Dylan songs while vegetarian birthday cake is served and black turtlenecks are handed out to hundreds of Apple fans, according to the event’s organizers, Brendan McElroy and Seth Rogers. [...]

“If you want to respect his memory, the best way of doing it is focusing on a lot of the positive memories we have of him,” [Rogers] said.

The party is planned to take place from 3:00 PM to 5:00 PM today, and CNBC earlier today aired an interview with the two organizers about their plans.


Coincidentally, today also marks the 12th birthday of MacRumors. The site has grown along with Apple and now reaches over 9.5 million unique visitors per month with roughly 70 million monthly page views. As always, we are grateful to our readers, contributors, sponsors, and all those for whom MacRumors is an online home or a regular stop.
[ 91 comments ]

uknowimright
by vegetarian are they meaning no dairy/animal by products? in that case they might want to use the term vegan

otherwise I don't see why they would say vegetarian at all, most birthday cake is made with no meat
Score: 7 Votes (Like | Disagree)


Yeh - this whole "happy birthday Steve" idea is rather creepy.

Jobs is gone. The turtlenecked overlord is no longer telling us how to hold our telephones.

Simple memorials in the year of his passing are one thing, but if we're looking at an annual party - some people do need to get a life.
Score: 5 Votes (Like | Disagree)

Apparently you don't know much about pancreatic cancer. His chances of being "completely fine" regardless of treatment choice were slim to none.

Jobs had a rare form of the cancer, known as neuroendocrine cancer, which grows more slowly and is easier to treat, explains Leonard Saltz, acting chief of the gastrointestinal oncology service at Memorial Sloan-Kettering Cancer Center. "Survival for many years or even decades with endocrine cancer is not surprising." For that type, the sort that Jobs had, "survival is measured in years, as opposed to pancreatic cancer, which is measured in months."

- I can't count how many times I visit MacRumors everyday!
Score: 4 Votes (Like | Disagree)

Just finished reading the book of Steve Jobs. Everyone should read it, it's just amazing. Eating all his life healthy food and dying so young. It ain't fair.
Congrats to Macrumors too. Already for 8 years i come here 3 times a day.

You need to get on a plane, fly to a 3rd world, go to a poor village (and I mean poor by a 3rd world country's standards), and then you can post about what is fair and what isn't. :mad:
Score: 2 Votes (Like | Disagree)
Read All Comments