Android and iOS Now Control Over 80% of Smartphone Sales in U.S.

Market research firm NPD today issued a press release discussing some of the trends in U.S. smartphone sales in 2011 compared to previous years, noting the strong growth in Android and iOS that has led the two platforms to now represent a commanding 80% of the market between them.

“The competitive landscape for smartphones, which has been reshaped by Apple and Google, has ultimately forced every major handset provider through a major transition,” said Ross Rubin, executive director, Connected Intelligence for The NPD Group. “For many of them, 2012 will be a critical year in assessing how effective their responses have been.”

The dramatic shift in the smartphone platform landscape is illustrated in a comparison chart (via BGR) showing how market shares have changed each year since 2006. 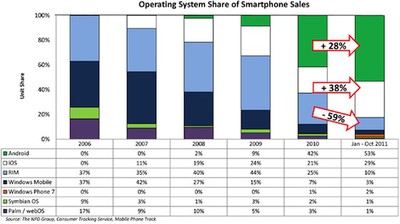 Back in 2006 before the launch of the iPhone, Research in Motion and Windows Mobile were neck-and-neck atop the smartphone market, with each taking 37% of sales. Palm held down third place with 17% of the market. Five years later, each of those platforms (or their successors) have seen their shares shrink dramatically as iOS and Android have grown substantially.

The past year has seen a continuation of the longer-term trend, with Android's market-leading share growing from 42% of the market to 53% and iOS growing from 21% to 29%. Third-place Research in Motion has experienced a remarkable collapse from its position atop the market just two years ago, falling from 44% in 2009 to 25% in 2010 and dropping again to just 10% so far in 2011.

I knew RIM was in trouble, but this, combined with their other difficulties this year, makes me think they're not going to be viable for much longer.


Let's be careful. How much did the market grow ? iOS and Android have made the market much bigger than it was in 2006. Whereas before Smartphones were used in business, they are now being used by consumers in a big way.

This is the problem with percentage based charts. You don't get the whole picture.
Score: 14 Votes (Like | Disagree)

And then there were two!
It will be interesting to see how the two big guys duke it out.


Let's hope neither ever wins over the other. The last thing we need is a damn OS monopoly again.
Score: 13 Votes (Like | Disagree)

Be careful what you wish for - a one horse race isn't good for anyone. A one race horse tends to get slow and lazy.
Score: 13 Votes (Like | Disagree)


Really, still over 150$ here. Depends on your carrier. Of course, Orange in the UK were giving out the iPhone 4 like 3 months after its release in 2010 and many carriers offer increased subsidies after a model has been out for months (like the Samsung Galaxy S II which is getting long in the tooth).

Why are some of you trying to pretend like Android is more subsidized than iPhone ? What's it to you that not everyone buys the damn Apple phone ?
Score: 8 Votes (Like | Disagree)

Android Rocks and Destroys all others!


I'm kind of new to online terminology, but doesn't the word "trolling" apply to this post? :rolleyes:
Score: 8 Votes (Like | Disagree)

I've heard that for the last three years, but I have yet to see it happen. What makes you think this? Because Android is on multiple phones while iOS is only on one?
Score: 7 Votes (Like | Disagree)
Read All Comments