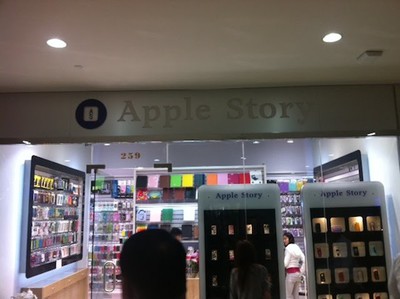 "Apple Story" in Flushing, Queens (Source: Greg Autry via BirdAbroad)
Reuters reports on a lawsuit filed by Apple against a pair of stores in New York City for their sale of unauthorized counterfeit Apple products. The trademark infringement suit was filed last month but has remained sealed until now in order to facilitate seizure of the counterfeit items from the two stores in the Chinatown section of Flushing in Queens.

According to a court filing from Apple, the company sent representatives to Apple Story and Fun Zone in Flushing on "multiple occasions over several weeks," where they bought an assortment of iPod, iPhone and iPad cases, as well as stereo headsets designed for use with iPhones.

All of the purchased goods carried an Apple trademark, according to the amended complaint. They were also marked with the phrase "Designed by Apple in California. Assembled in China," and included markings similar to those found on genuine Apple goods.

The headsets came with packaging that was "nearly an exact duplicate" of that for genuine Apple goods, the lawsuit said.

Apple was granted a warrant to seize the counterfeit products on July 27th, and the courts have granted a preliminary injunction barring the two stores from selling the knockoff products. Apple has also requested that one of the stores, Apple Story, change its name in order to prevent confusion with Apple's own stores and branding, but the court has yet to rule on that issue. A settlement between Apple and the stores' owners is said to be under negotiation.

Apple's case appears to extend beyond the two stores, however, as the lawsuit seeks to include people and businesses engaged in the production, sale, and distribution of the products, although those defendants have yet to be identified.

I could understand if it were fake apple devices being sold, but just accessories doesn't seem like a big deal. Why is apple wasting it's time doing pointless stuff like this?


Protecting your brand is important regardless of product value.
Score: 25 Votes (Like | Disagree)

No offense... anyone wanna tell me how they're counterfeit?
They're just cases... (from what I see)
Unless they have "apple logos"

They were also marked with the phrase "Designed by Apple in California. Assembled in China," and included markings similar to those found on genuine Apple goods.

No offense... anyone wanna tell me how they're counterfeit?


You didn't read the article, so why bother writing a reply that you won't read?
Score: 18 Votes (Like | Disagree)

I could understand if it were fake apple devices being sold, but just accessories doesn't seem like a big deal. Why is apple wasting it's time doing pointless stuff like this?

If you own trademarks and don't enforce them, you could, in a court of law, lose the mark. That's part and parcel to trademark protection and enforcement.
Score: 9 Votes (Like | Disagree)

That has to be balanced against the public's perception of your company. You may be totally in the right in the eyes of the law, but when average Joe perceive you as a big, cold, mean giant out to make life hell for the little guys, you lose the intangible: likability.

One incident like this should not change things much, but add to Apple's seemingly petty lawsuits against other phone makers, negative publicity starts to add up.


A patent/trademark attorney, you're not.
Score: 7 Votes (Like | Disagree)
Read All Comments