In a lengthy article on DVCreators.net, Josh Mellicker revisits the Final Cut Pro X complaints and what Apple might have to do to address its limitations. The full article may be of interest to video editing professionals. 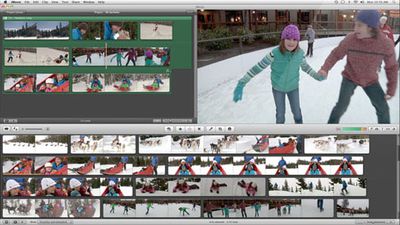 For the rest of us, the most interesting part of the article was a reference to how Apple's Chief Architect of Video Applications Randy Ubillos had originally created an application called "First Cut" which later evolved into iMovie '08. iMovie '08 was met with similarly mixed reactions due to the complete overhaul over iMovie 6.

Steve Jobs told the story when he originally introduced iMovie during a keynote in August 2007, but left out some details. According to Mellicker, Ubillos returned from vacation and found that Final Cut wasn't ideal for organizing raw footage. From that experience, First Cut was born which would let you import your raw footage and quickly skip through, organizing and building a rough edit. The intention originally was to then export to Final Cut Pro. At some point, Apple officially latched onto the project and turned it into the new iMovie '08.

Ubillos was the creator of the first three versions of Adobe Premiere and later developed KeyGrip which was sold to Apple and released as Final Cut Pro. Ubillos continues to be the Chief Architect of Video Applications at Apple.

With the release of Final Cut Pro X, Ubillos has been answering emails and told one of our readers "I'm extremely proud of Final Cut Pro X, it's a huge step forward in digital storytelling." He went on to say suggest if the user gave it a fair shot, they may be pleasantly surprised. Ubillos also write "Final Cut Pro X 1.0 is the beginning of a road, not the end."

k2director
The real tragedy here is if Apple thinks all the anger over FCP X is just about that particular software, and not the growing fear over the last few years that pro apps and gear are a fading priority for Apple. For instance:

* Apple bought Shake, and then cancelled it. Cancelled it! Apple said there would be a next-generation app coming in Shake's place, but that never showed up.

* Apple "phoned-in" the last few Mac Pro updates, just slapping in some new Intel chips, but not adding value such as 1) more expansion slots (three slots is not a lot for a workstation), and 2) never bothering to include an eSATA port, even though tons of media professionals started using eSATA, 3) never bothering to include a USB3 port, etc. etc. Many people are wondering if the new Thunderbolt port will be Apple's excuse to give up on the Mac Pro altogether.

* Multiple rumors that Apple was trying to sell its Pro Apps division....


People have spent a lot of time and money building their businesses and careers around FCP. But since the iPhone launched, FCP and other pro apps and gear have gotten noticeably less attention.

That makes a lot of people nervous, and left to wonder what Apple's intentions are. You really can't help but wonder because Apple is so ridiculously silent about its intentions, which works fine on the consumer side but not when people are investing tens of thousands of dollars in apps and gear around Apple.

Combine that with Apple shipping a new version of Final Cut that is so radically different and so underpowered, and also discontinuing sales for FCS 3 suites and FCP Server (with no explanation about Server's demise or any intentions on bringing back multi-user functionality) and you can see how the dam finally burst in the Pro community and the angry flood waters rushed in.

Apple better start communicating better with its pro customers, and re-assuring them that it's committed to professional work in this new era of the iPhone/iPad. Otherwise, a lot of people will be heading for the doors...
Score: 53 Votes (Like | Disagree)

Maybe good later on, but right now it sucks.


Funny thing here is that even if it had all the features possible (many features coming soon by the way) no Pro will just jump to use it anyway. What smart people do is install it on a separate computer and leran it, so that when time comes to switch it's not that hard. So that leaves just pro wannabes, trolls and just regular haters and people that have no clue that just take the "omg it has no feature x" and run with it, whining and moaning about this.

Since i'm being down voted it looks like i'm spot on with this one. Sad people are sad.
Score: 26 Votes (Like | Disagree)

This is the same genius that ruined iMovie.

I guess I really don't have a "learned" opinion on this. I am a high-level consumer video editor at best, Just a few family things and stuff destined for youtube.

Still, I cant help but think back to what this guy did to iMovie. He took a straightforward program that was very logical, and turned it into a toy. Now, some three versions later, iMovie is only now providing some of the control and editing features which it had YEARS AGO before this "visionary genius" changed (ruined) it.

Maybe I am missing something, and I could be totally wrong, but it seems like this guy is in the process of doing the same thing with FCP. He took something which I used to see as professional and somewhat intimidating (FCP) and dumbed it down. i can only imagine what aspects of fine level control and precision has been lost in the process.

Cause:
Some guy has difficulty organizing raw shots from his home videos.

Cause:
FCP7 is written in Carbon.

Effect:
If Apple is going to have to rewrite FCP, they may as well give it a fresh start.
Score: 24 Votes (Like | Disagree)

You got a good point there. I mean we have people bashing Ubillos, the person that created the stuff that these same people are praising.


A great example of a company that is doing this is Netflix. They invented the mail-order DVD. And yet they invested heavily in streaming, hurting their own DVD-mail order business. But they knew that DVD-mail order was doomed, so they helped kill it.

Of course a massive difference is that Netflix still rents DVDs. The day it turned on its streaming servers it didn't simultaneous shut down its mail-order business.

Apple's handling of the move to FCP X has so far been a road map of how not to do things. How many professional apps get made fun of on late night TV? David Pogue even came around and agreed that FCP X, as a pro tool, doesn't meet the needs of the industry today. Jim Jannard (founder of Oakley and RED) has said that Apple continues to drop the ball by not communicating w/users. A number of FCP evangelists are now former evangelists.

And it's not just one thing it's a perfect storm of multiple events. FCP X lacks basic yet very necessary features. Apple apparently dropping support for FCS (software recalled from retailers, FCS update links on Apple's site now redirect to FCP X page, etc.,). Final Cut Server, Apple Color, DVD Studio Pro and Sound Track Pro all got axed w/o any warning. If Apple publicly provided a road map or said they'd concurrently support FCS until FCP X was up to snuff none of this would've happened.

The reaction from the pro segment is not knee jerk like some people believe. Editors and post facilities have been waiting for a significant update to FCS for years. The small update in '09 was met with a collective, "Really, this is it?" and people were already making alternate plans for their businesses. Because, like smart business people, they know they are in the editing business, not the FCP editing business. Apple finally launched FCP X and here we are. These people aren't transitioning way from FCP 'cause they are mad at Apple. They are leaving because they can't wait indefinitely on Apple to release a product that meets their needs.

Imagine if they had unveiled FCPX as the new Final Cut Express instead. Buyers of that product would have been absolutely delighted by the many leaps forward in power and simplicity, and the missing features would have been insignificant to them. A new Final Cut Express would also have given pro editors a tantalizing preview of a new FCPX to come.


Read the rest of his thoughts on this: