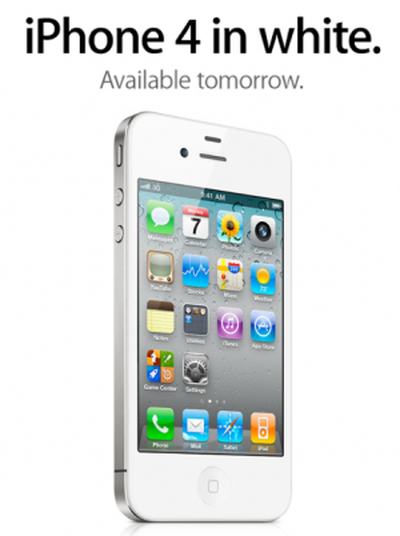 Apple officially announced that the white iPhone 4 will arrive on April 28th.

Apple also announced that the iPad 2 will officially launch in 12 new countries this week:

Apple today announced that iPad 2, the second-generation of its breakthrough post-PC device, will arrive in Japan on Thursday, April 28 and Hong Kong, Korea, Singapore and eight additional countries on Friday, April 29. iPad 2 will be available at Apple retail stores at 9 a.m. local time, select Apple Authorized Resellers, and online through the Apple Store (www.apple.com) beginning at 1 a.m. Additionally, iPad 2 with Wi-Fi will be available in China beginning Friday, May 6.

...the hardware is almost 12 months old.


And yet still it's the best phone out there.
Score: 9 Votes (Like | Disagree)

Zeus86
So what if people want to buy the phone!!! Some people are taking this to serious. It's a good looking phone end of story. The iPhone 4 is still the current generation and nobody knows nothing about the iPhone 5 so stop acting like you do.
Score: 8 Votes (Like | Disagree)

Nukemkb
Finally! It has been a long wait...
Score: 5 Votes (Like | Disagree)

nobody knows nothing about the iPhone 5 so stop acting like you do.


That's not true. I know nothing about the iPhone 5.
Score: 4 Votes (Like | Disagree)

mygoldens
It is about time!

bmat
There are many people that purchased iPads in the holidays, even though the successor was just months away. And I think a lot of people with iPhones skip a generation unless it is a radical change. I know many people with 3GS that skipped the 4, and I had a 3G and skipped the 3GS.

In any event, I doubt the target is black iPhone 4 owners. And I doubt those that really wanted an iPhone 4 10 months ago but in white waited. It is just for those who still might buy one now anyway, and now they have a choice.
Score: 4 Votes (Like | Disagree)
Read All Comments