Last December, we reported on survey results showing that users of portable games are increasingly defecting from dedicated devices such as the Nintendo DS and Sony PSP to smartphones such as the iPhone. 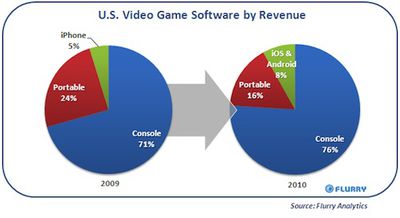 New data from analytics firm Flurry comparing overall video game market share in 2009 and 2010 reveals a similar trend, with iOS and Android combining to take 8% of the overall market and a full 34% of the portable gaming market as measure by revenue. In the overall market, console games continue to dominate, growing from 71% to 76% on only a slight increase in total video game revenue.

But setting aside the console market, the success of iOS and Android (primarily iOS according to Flurry's data) as gaming platforms is more obvious in the portable market, where the smartphone platforms have increased their share of revenue from 19% in 2009 to 34% in 2010 at the expense of Nintendo's and Sony's offerings.

It is also important to note that the surge in revenue share for smartphone platforms comes at a significantly lower average price point than for dedicated devices, meaning that even the strong growth from those platforms has eaten into the total portable gaming market, which dropped from $2.7 billion in 2009 to $2.4 billion in 2010. The "race to the bottom" has long been one of the main concerns for smartphone application developers, particularly traditional game developers who have been accustomed to the pricing model for dedicated gaming devices. But users are clearly shifting toward more casual gaming at lower price points on their smartphones, and developers that have embraced that market are in many cases seeing solid results.