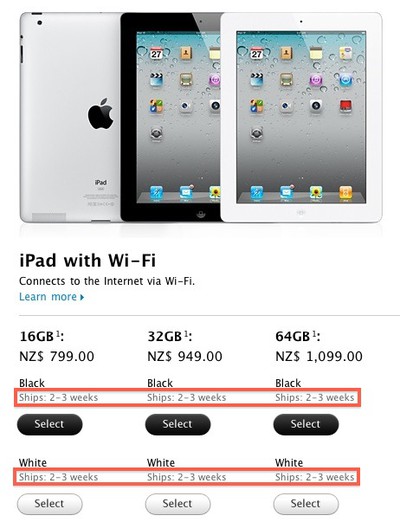 In line with Apple's confirmation earlier this week that online sales of the iPad 2 would begin at 1:00 AM Friday in each of 25 new countries, the device has already gone on sale in New Zealand and Australia.

As may have been expected given current shortages in the United States, new iPad 2 orders in New Zealand and Australia are not shipping immediately but instead come with shipping estimates of 2-3 weeks. Apple could certainly ship units earlier than the stated timeframe, but the company clearly does not want to promise that units will be moving out for distribution immediately.

Apple does typically maintain separate distribution chains for its North American, European, and Asian markets that sometimes result in differences in shipping estimates among countries, so it will be interesting to see the status of deliveries in European countries once sales begin in those countries.

Shipping estimates for new online orders in the U.S. remain at 4-5 weeks.

Monday May 3, 2021 10:04 am PDT by Eric Slivka
Apple today released iOS and iPadOS 14.5.1, minor security updates that come just a week after the release of the iOS 14.5 update. There is also a companion watchOS 7.4.1 update for Apple Watch and an iOS 12.5.3 update for older iPhone and iPad devices that don't support Apple's latest operating system versions. According to Apple's release notes, the update fixes a bug with App Tracking...
Read Full Article • 107 comments

Tuesday May 4, 2021 9:51 am PDT by Juli Clover
Just after Apple announced its AirTags, Tile CEO CJ Prober relayed his concerns about competing with Apple in the tracking space, and said that Tile would ask Congress to investigate Apple's business practices specific to Find My and item trackers. Prober this week did an interview with Bloomberg, where he further expanded on Tile's complaints about Apple and why he feels that Tile is...
Read Full Article • 353 comments

Saturday May 1, 2021 10:41 am PDT by Sami Fathi
Apple is laying the groundwork for adding HiFi support to Apple Music which would offer Apple Music subscribers and owners of compatible devices, such as certain models of AirPods, access to high-fidelity audio streaming, according to code within the iOS 14.6 beta discovered by MacRumors. Earlier today, a report claimed that Apple will announce a new $9.99 per month Apple Music tier that...
Read Full Article • 208 comments