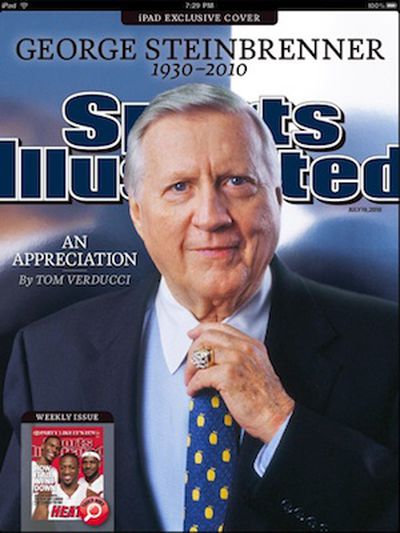 All Things Digital reports on Time Inc.'s struggles with Apple as it has tried to roll out a true subscription program for its Sports Illustrated iPad application, an option that Apple continues to be unwilling to support.

Last month, the publisher was set to launch a subscription version of its Sports Illustrated iPad app, where consumers would download the magazines via Apple's iTunes, but would pay Time Inc. directly. But Apple rejected the app at the last minute, forcing the Time Warner (TWX) unit to sell single copies, using iTunes as a middleman, multiple sources tell me.

Since then, Time Inc. executives "have been going nuts", trying to figure out how to get Apple (AAPL) to approve a subscription plan. One of the more desperate suggestions, which apparently didn't get traction: Pulling the publisher's apps out of the iTunes store altogether.

The reasons for Apple's reluctance are not entirely clear, although the theories are ones that have been around for some time: Apple may be concerned over subscriber information being held by the publishers rather than Apple itself, and the company may be working to retain control over and profits from magazine sales by pushing downloads through the App Store rather than through publishers.

As the report notes, other entities such as The Wall Street Journal are permitted to bill users directly for iPad subscriptions to their content, and thus it is unclear exactly why Apple is targeting magazine subscriptions so closely. But until the stalemate is broken to allow publishers to offer subscription packages or print-electroinic bundles in some way as most parties seems to desire, it appears that magazine users will be limited to the single-issue purchases prevalent in the App Store today.

Update: We have heard that the holdup, at least in the case of the Sports Illustrated subscription plan, is in fact a dispute over revenue, with Apple maintaining that it should be able to collect a 30% cut of revenue as it does for content distributed through the App Store. Publishers, understandably, would prefer to move out from under the App Store umbrella for their subscriptions and keep 100% of the revenue for themselves.