iPod Touch Seen as Building Base of Future iPhone Users

Mobile analytics firm Flurry yesterday released a report promoting an interesting take on Apple's iPod touch market, one that sees its strong performance among young consumers as building a base that will naturally migrate to the iPhone as they mature.

As all industry eyes look to the iPhone, the iPod Touch is quietly building a loyal base among the next generation of iPhone users, positioning Apple to corner the smartphone market not only today, but also tomorrow. In terms of Life Stage Marketing, the practice of appealing to different age-based segments, Apple is using the iPod Touch to build loyalty with pre-teens and teens, even before they have their own phones (think: McDonalds' Happy Meal marketing strategy). When today's young iPod Touch users age by five years, they will already have iTunes accounts, saved personal contacts to their iPod Touch devices, purchased hundreds of apps and songs, and mastered the iPhone OS user interface. This translates into loyalty and switching costs, allowing Apple to seamlessly "graduate" young users from the iPod Touch to the iPhone.

As part of its metrics report, Flurry reveals an iPod touch market that is growing faster than the iPhone market in terms of "user sessions", with the iPod touch increasing its session share by four percentage points over that past five months while the iPhone's share has slipped by seven percentage points. 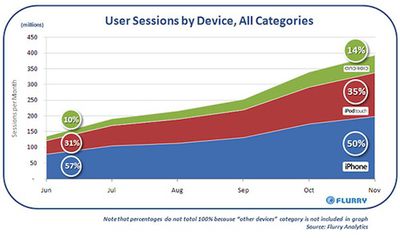 A major factor in the growth of the iPod touch has come from games, where the iPod touch has overtaken the iPhone (49% to 46%) in the number of user sessions. The usage pattern falls in line with Apple's emphasis on promoting the iPod touch as a gaming device, a market positioning that Apple took some time to come around to.

While the iPod touch's tremendous performance, growing 100% year-over-year, has propped up lagging sales of Apple's traditional iPods, the iPhone has quickly grown to surpass the iPod division in revenue. Consequently, Apple's strategy of fostering the next generation of iPhone users via the iPod touch bodes well for the company's continued growth in the mobile market.
Related Forum: iPhone
[ 87 comments ]