Wireless Charging for the iPhone and iPod Touch 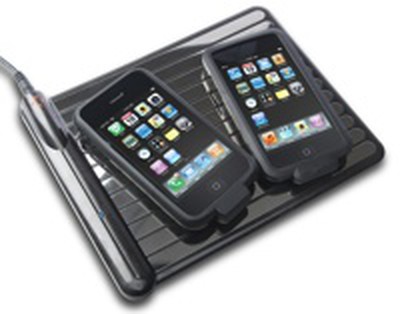 A company called WildCharge yesterday announced that it is set to begin offering the first wireless charging cases for the iPhone and iPod touch. This allows the devices to be charged by simply placing them on a special charging pad without the need for any cables. The iPod touch skin is available for order immediately, while the iPhone skin, compatible with all iPhone models, will be available starting in early July.

The WildCharge Skins are durable, protective, form-fitting cases that when placed on the WildCharger Pad, transfer wire-free power from the Pad to the device inside the skin. The soft cases provide the same protection consumers already enjoy from traditional skins, but have the added value and convenience of enabling a wire-free charge. The WildCharger Pad, used in conjunction with the skins, delivers full power to multiple devices, allowing them to simultaneously charge together on the Pad while eliminating the clutter caused by multiple chargers and power cords.

Wireless induction charging has seen increased attention in recent months with the deployment of Palm's Touchstone system for use with the new Palm Pre. Palm's $70 Touchstone system includes both a charging dock and a separate back case for the Pre that is required to allow it to charge wirelessly.

Update: WildCharge's solution is not induction-based.

Friday July 10, 2020 7:24 am PDT by Eric Slivka
Apple and Foxconn have reached a key milestone in the development of Apple's long-rumored augmented reality headset, with the semitransparent lenses for the device moving from prototype to trial production, reports The Information. Apple is developing the lenses on a single production line at a Foxconn factory in Chengdu in southwestern China, where most of Apple’s iPad production is...
Read Full Article • 81 comments

Friday July 10, 2020 3:33 am PDT by Tim Hardwick
Apple TV+ today debuted "Greyhound," the highly anticipated Second World War movie starring Tom Hanks as a naval officer given command of Navy destroyer Greyhound in the Battle of the Atlantic. "Greyhound" features Hanks as George Krause, who must fight his own self doubts and personal demons as he leads a convoy of Allied ships against German U-boats to prove that he belongs in command. ...
Read Full Article • 65 comments