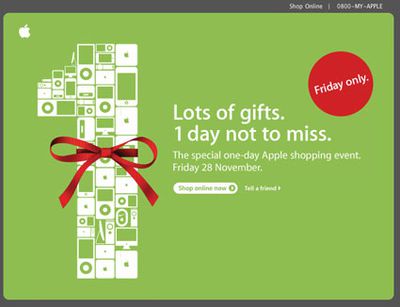 Apple NZ has started emailing customers about their Black Friday event for one day only on November 28th.

Come back to the Apple Online Store this Friday for a special one-day-only Christmas shopping event. Youll find dozens of great iPod, iPhone and Mac gift ideas all with free delivery.

It's been widely expected that Apple would be offering a day-after-Thanksgiving sale. Previous year sales have offered modest discounts on select Apple gear. More substantial discounts may be found at 3rd party retailers. MacRumors will report on these and other substantial Apple deals on Friday.