'Official' MMS May Arrive for iPhone

MacWorld Sweden caught the attention of iPhone users when they reported that Swedish carrier Telia is planning on bringing Multimedia Messaging Service (MMS) to their iPhone users. MMS is a feature that has been long requested by iPhone users and would allow the easy sending of multimedia (photos, video) to your contacts.

Their solution appears that it may be a third party application developed by Swedish developer Mobispine. Mobispine is marketing their MMS application to mobile carriers (such as AT&T) as a solution to provide the service to their end users.

We're confident that operators will find the service easy to use and profitable with an opportunity to expand messaging usage, improve subscriber retention and hopefully increase revenue. The service will also increase customer loyalty and recognition as the brand is displayed on the user's phone. The application is white-labelled and will be branded for each operator and distributed via the App store.

While there have been many MMS-like applications that have appeared in the App Store, this solution appears like it would tie in directly with the carrier, allowing more seamless messaging between mobile phones. Of course, this would also mean that carriers would likely be able to charge a premium for MMS messages. 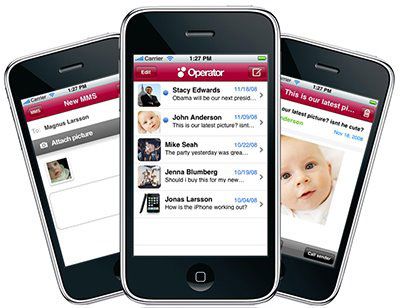 MMS on iPhone enables easy, convenient and cost-effective communication with colleagues, friends and family. Users can easily create a new MMS and attach a picture from an album on the phone or simply take a new snapshot with the camera. The application is integrated with the iPhone's contacts for easy access. Some of the key features for end-users include the ability to easily send and receive messages from iPhone to any phone with a native and intuitive user interface. The application also offers the ability to capture a picture via the iPhone camera or the option to select from existing photos.

Apple will still have to approve the application for inclusion in the App Store, but with the mobile carrier's blessing, it seems likely this app would see approval.