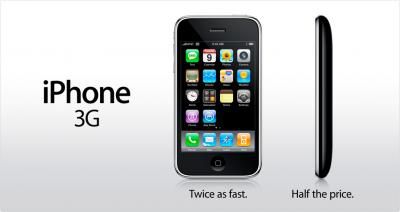 "Just one year after launching the iPhone, were launching the new iPhone 3G that is twice as fast at half the price," said Steve Jobs, Apples CEO. "iPhone 3G supports Microsoft Exchange ActiveSync right out of the box, runs the incredible third party apps created with the iPhone SDK, and will be available in more than 70 countries around the world this year."

Pricing and Availability
The iPhone 3G will be available July 11th in 22 countries for $199 for 8 GB and $299 for 16 GB. The 16 GB model also comes in white. Apple has posted details on their website, but it is currently overwhelmed.

sold my iPhone 1st generation for $420 on ebay.