By MacRumors Staff on December 11, 2019
Jump to How Tos Articles

Live Photos are a feature introduced with the iPhone 6s and the iPhone 6s Plus, designed to add life and vitality to the standard still photo. When capturing a picture, the Live Photo feature captures an extra 1.5 seconds before and after a shot, with the footage being used to animate the photo with movement and sound.

Live Photos can only be created on an iPhone 6s or later, but they can be viewed on iOS devices that run iOS 9 or later, Apple Watches that run watchOS 2 or later, and Macs that run OS X El Capitan or later. On non-supported devices, Live Photos appear as standard JPGs.

As of iOS 11, Live Photos now support effects to turn them into video loops, bounce back and forth to instantly play in reverse, and long exposure to capture time and movement in a still photo.

How to Make a New Key Photo in Live Photos

Monday February 5, 2018 11:54 am PST by Juli Clover
Apple's Live Photos, introduced in 2015, are photos that capture 1.5 seconds of video before and after you take a picture, with the aim of adding a little bit of life and movement to still images. When you take a photo with an iPhone, not every shot comes out crisp and clear, but with Live Photos, if you get a blurry image, you can open it up and see if other frames you captured are clearer. ...
Read Full Article (12 comments)

Monday September 25, 2017 2:09 pm PDT by Juli Clover
iOS 11 and macOS High Sierra bring Live Photos to FaceTime, allowing you to preserve a special memory while video chatting with friends and family. Whenever you use the new Camera button that's at the bottom of the screen on a FaceTime call, it captures a photo, but don't worry - this can't be done in secret and the other party is always notified when an image is captured. How to Take a Live ...
Read Full Article (11 comments)

How to Edit Live Photos in iOS 11

Friday September 22, 2017 12:59 pm PDT by Mitchel Broussard
Apple originally debuted Live Photos in 2015, alongside the iPhone 6s and iPhone 6s Plus, marking it as a feature that enhances the smartphone's photography with pictures that move when a user performs a 3D Touch on them. With the launch of iOS 11, Live Photos can now be edited in a few useful ways, and this guide will help you make a new key photo (which shows up first in your Photo Album), as...
Read Full Article (17 comments)

How to Use Live Photos on iPhone and iPad

Thursday November 12, 2015 1:15 pm PST by Lory Gil
Apple originally debuted Live Photos for iPhones in 2015, touting them as an enhanced mode of photography that lets you take pictures which move when you press on them. Since then, Live Photos have become a standard feature available on iPhones and most iPads, and Apple has added some extra tricks in successive versions of iOS. Basically, a Live Photo is a combination of a video clip and a...
Read Full Article (18 comments) 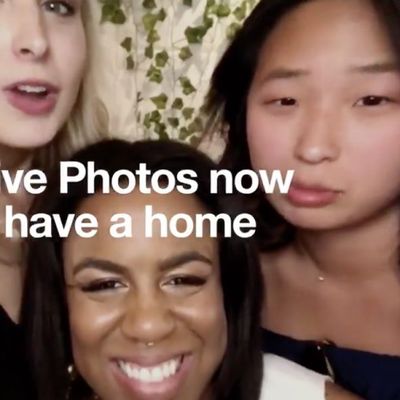 Twitter Finally Launches Support for Live Photos, Allowing Them to Be Uploaded as GIFs

Wednesday December 11, 2019 2:34 pm PST by Juli Clover
Twitter today announced support for Apple's Live Photos, which can now be uploaded to Twitter and shared as GIFs. Apple first introduced ‌Live Photos‌ in 2015 alongside the iPhone 6s and 6s Plus, though most social networks still do not support the format and do not allow ‌Live Photos‌ to play when uploaded. ‌Live Photos‌ are designed to add movement to still photos to bring them to life, ...
Read Full Article 42 comments 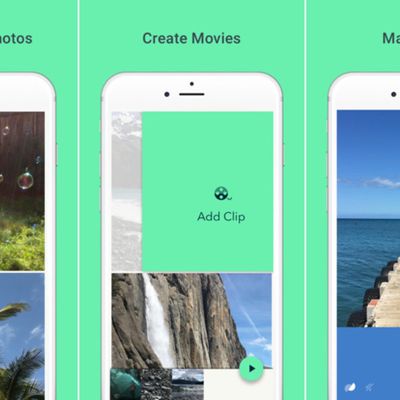 Friday March 17, 2017 7:41 am PDT by Mitchel Broussard
Last year Google launched an app called Motion Stills that fixed a lot of issues that users had -- and still have -- with Apple's new Live Photos feature introduced in the iPhone 6s and iPhone 6s Plus. With the new update, Motion Stills now lets users customize the displayed frame that appears automatically in the camera roll of the iOS Photos app. The intent is to display more clearly what...
Read Full Article 13 comments

Wednesday September 21, 2016 4:03 am PDT by Tim Hardwick
Blogging site Tumblr has announced web support for Live Photos, the animated image format Apple introduced with the iPhone 6s and 6s Plus. Now when visitors to a Tumblr-hosted site see the concentric circles in the top-left of an image, they can click and hold on the picture to play it, audio included. "That’s right! Live Photos work on the web now," reads the company's announcement....
Read Full Article 4 comments

Thursday June 9, 2016 4:39 pm PDT by Juli Clover
Earlier this week, Google released a new app called Motion Stills, designed to turn Live Photos captured with the iPhone 6s, iPhone 6s Plus, and iPhone SE into GIFs or videos. Over the past couple of days, we spent some hands-on time with Motion Stills, and have been really impressed with the way it transforms Live Photos into a more useful, shareable medium. Motion Stills isn't just an app...
Read Full Article 30 comments

Tuesday June 7, 2016 12:49 pm PDT by Juli Clover
Google today announced the launch of a new app called Motion Stills, which is designed to create unique GIFs from Live Photo images captured with the iPhone 6s, iPhone 6s Plus, and iPhone SE. According to Google, the app was built by the Google Research Team and uses the company's video stabilization technology to freeze the background into a still photo or create cinematic panoramas. Multiple ...
Read Full Article 97 comments

Thursday January 14, 2016 4:04 pm PST by Juli Clover
Alongside the iOS 9.3 beta seeded to developers earlier this week, Apple also provided an OS X 10.11.4 beta with some minor updates to the OS X El Capitan operating system. OS X 10.11.4 was overshadowed by all of the features introduced in iOS 9.3 so it's taken a few days for people to dig into the release to find out what's new. One of the new additions to OS X 10.11.4 is improved Live Photos ...
Read Full Article 52 comments

Monday December 21, 2015 10:49 am PST by Juli Clover
Starting today, some Facebook users will be able to view Live Photos in their Facebook feeds using the Facebook for iOS app, reports TechCrunch. Introduced with the iPhone 6s and the iPhone 6s Plus, Live Photos are motion-enabled images that capture the moments just before and after a photo is taken. Facebook plans to gradually roll out support for Live Photos, so while some Facebook app users ...
Read Full Article 47 comments

Thursday December 10, 2015 4:46 pm PST by Husain Sumra
While iPhone 6s and 6s Plus users can share Live Photos with each other through services like iMessage, the hybrid image / video can't be easily shared to social networks. Today, Tumblr updated its iOS app with Live Photos support, making it the first major social network to do so. As TechCrunch notes, Tumblr users tend to upload, share, and re-share GIFs and other kinds of animated images,...
Read Full Article 20 comments

Monday October 26, 2015 6:19 pm PDT by Juli Clover
Just a day after debuting three new iPhone 6s ads focused on the iPhone's camera and wireless "Hey Siri" functionality, Apple has shared a new short 15-second ad in the same series, this time focusing on Live Photos. In the "Half Court" ad, the iPhone 6s is used to capture a half-court shot made by Golden State Warriors guard Stephen Curry, which is then played back again. The iPhone 6s is...
Read Full Article 99 comments

Thursday October 15, 2015 1:33 am PDT by Husain Sumra
The new iPhone 6s and 6s Plus allow users to create Live Photos, which capture an additional 3 seconds of video around a still image and play it back when a user 3D Touches the photo. Priime today launched a new app called Live GIF, letting users easily turn their Live Photos into GIFs that are viewable on all devices and the web. When launched, the app automatically detects whether your phone ...
Read Full Article 27 comments

Tuesday September 22, 2015 2:03 pm PDT by Juli Clover
The iPhone 6s and 6s Plus include several new camera features that have been highly popular in reviews thus far, but there's also a fantastic update to the way photos are displayed on the two devices. With Live Photos, exclusive to the iPhone 6s and 6s Plus, a bit of motion is captured alongside each photo, enabling short animations that bring each image to life. To enable Live Photos, the...
Read Full Article 318 comments

Friday September 11, 2015 1:17 am PDT by Arnold Kim
One of the novel new features coming in the iPhone 6s is the new Live Photos feature which captures an additional 3 seconds of video surrounding photos on the new iPhones. The new feature is on by default and allows you to take photos as usual. Apple describes it:A still photo captures an instant frozen in time. With Live Photos, you can turn those instants into unforgettable living memories. At ...
Read Full Article 392 comments
Newer Posts
Archives
Older Posts