The new iPhone 6s and 6s Plus allow users to create Live Photos, which capture an additional 3 seconds of video around a still image and play it back when a user 3D Touches the photo. Priime today launched a new app called Live GIF, letting users easily turn their Live Photos into GIFs that are viewable on all devices and the web.

When launched, the app automatically detects whether your phone has Live Photos and lists them in a grid. The user simply has to tap the Live Photo they want to turn into a GIF and the app does the rest, converting it to a shareable GIF. That GIF or a video taken from the Live Photo can then be saved to the Camera Roll, sent in a message or email, or uploaded to social networks. 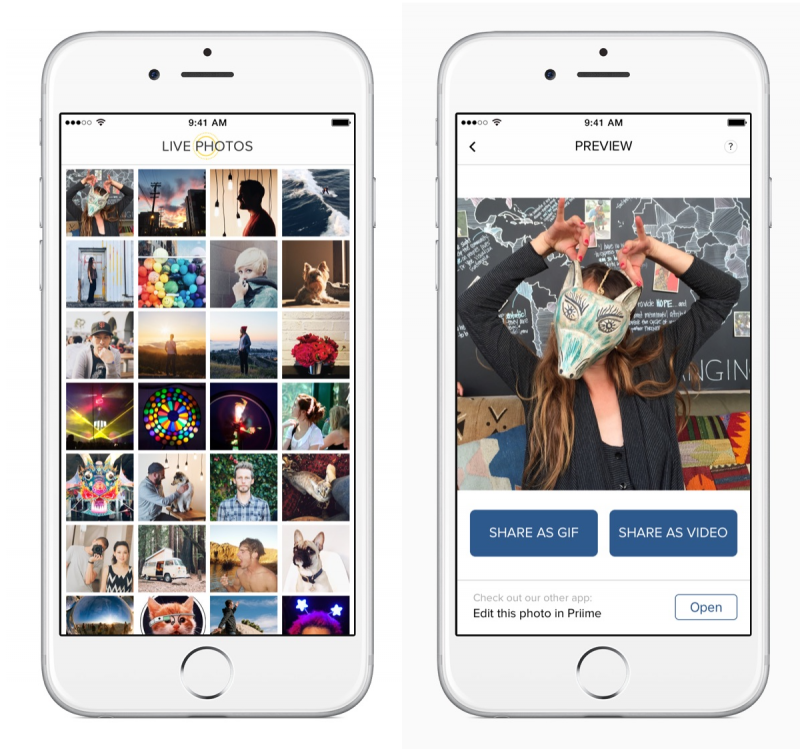 While the app is fairly limited in use and sports a banner on the bottom prompting users to edit their photos in the freemium Priime photo editing app, Live GIF is the first app to enable users to convert their Live Photos to GIFs, allowing them to be shared on most social networks.

Live GIF for iPhone is available in the App Store for $1.99. [Direct Link]

we need to move on from GIF.


You must mean we need Preview to finally support GIF playback.

No, I want the opposite. The less support GIF gets, the more likely we can move on to something better that doesn't have all of the downsides of a movie (basically something with better compression, still audio-free, easily embeddable, and not CPU intensive).


Outside of a GeoCities or Tumblr page that's made up of an obsessive amount of GIF posts, they are already small in size, audio-free, easily embeddable and non-CPU intensive.

I can't imagine what's more basic in an image-sequence format than a series of JPEGs rapidly playing in succession of each other.
Rating: 4 Votes

Bearxor
If anyone is interested in GIF creation there is an app called Burstio that will take your burst mode photos (when you hold down the shutter button) and let you convert those to GIF's. It's pretty awesome

farewelwilliams
we need to move on from GIF.
Rating: 3 Votes

You must mean we need Preview to finally support GIF playback.


No, I want the opposite. The less support GIF gets, the more likely we can move on to something better that doesn't have all of the downsides of a movie (basically something with better compression, still audio-free, easily embeddable, and not CPU intensive).
Rating: 3 Votes

Anonymous Freak
GIF needs to die already - APNG is good, an actual video file is good. Yes, properly-created GIF files of the right content will be the smallest file type, but full-color real-world photos/video are *NOT* the right content! They're meant for simple line drawing type content.
Rating: 2 Votes

1080p
I actually wish there was a way to create live photos from a gif or a video file. That way I could make some killer motion lockscreen wallpapers!
Rating: 2 Votes

ThunderSkunk
We should phase out jpg support too, since that's an old, lossy, compressed, limited format as well, and there have been far better options out there for years.
Rating: 1 Votes

It's not working for me. Every time I go to create a GIF it hangs.


I'm the developer of Live GIF. We've seen a few reports that Live Photos that are shorter than 2 seconds cause the app to hang converting to GIF. We already have a fix for this queued up. Most Live Photos are 3 seconds long, but sometimes iOS trims them to shorter lengths. I can give you a Test Flight invite to get the latest build while we wait for App Review if you're interested, just PM me your email. Thanks and sorry about this!
Rating: 1 Votes

Any ideas how to get Live Photos on Photos for OS X? I read it can only be done via cable? Is that right? I use an app called PhotoSync to currently sync my pics over but with Live Photos it only sends the main image. Also AirDrop doesn't seem to work with my iPhone and RMBP.


Only Photos 1.1 in El Capitan natively supports Live Photos, regardless to how they're imported. You can Photo Stream from your iPhone or turn on iCloud Photo Sharing.
Rating: 1 Votes
[ Read All Comments ]