Google today announced the launch of a new app called Motion Stills, which is designed to create unique GIFs from Live Photo images captured with the iPhone 6s, iPhone 6s Plus, and iPhone SE.

According to Google, the app was built by the Google Research Team and uses the company's video stabilization technology to freeze the background into a still photo or create cinematic panoramas. Multiple clips can also be combined into a montage.

GIFs created by Motion Stills can be shared via apps like Messages or on social media networks. 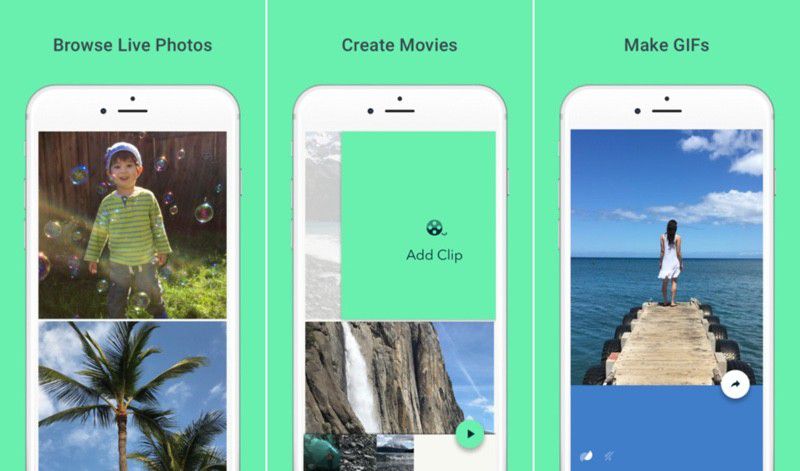 We pioneered this technology by stabilizing hundreds of millions of videos and creating GIF animations from photo bursts. Our algorithm uses linear programming to compute a virtual camera path that is optimized to recast videos and bursts as if they were filmed using stabilization equipment, yielding a still background or creating cinematic pans to remove shakiness. [...]

Short videos are perfect for creating loops, so we added loop optimization to bring out the best in your captures. Our approach identifies optimal start and end points, and also discards blurry frames. As an added benefit, this fixes "pocket shots" (footage of the phone being put back into the pocket).

There are several other apps designed to create GIFs for Live Photos, so Google's offering isn't unique, but it is notable that Google is offering an iOS-only app that works with an iOS-only feature. Google says the information it learns from Motion Stills will perhaps be used to introduce new capabilities into Google Photos in the future.

Aside from making Live Photos viewable on iOS and Mac devices running the latest operating systems and implementing an API for developers to incorporate Live Photos viewing into their apps, Apple has not designed any tools that allow users to manipulate and edit their Live Photos or convert them into videos or GIFs.

Google's new Motion Stills app is available now and can be downloaded from the App Store for free. [Direct Link]

JimmyHook
Apple makes the environment for 3rd Party apps to flourish. There is ZERO need for Apple to make an app like this. Ridiculous responses on here
[doublepost=1465327128][/doublepost]

I am a huge Apple fan but likely Apple is on the path to being just another company. OS's are extremely buggy, iPad line being fragmented, who knows what new fragmenting they'll add to the iPhone line, competitors have better Apps than stock... Feels like they're turning into Microsoft. The once popular company that turned into we'll do the bare minimum thinking fans and brand reputation will always remain. That battery pack Apple made for the 6/6s with like WTF... seriously zero design or care given.

I guess this is the new Apple.

My god can we have a thread with no apple bashing? Its pretty damn annoying at this point. Every damn thread is the same now.

So now apple should make every app themselves? :rolleyes:

Apple makes the environment for 3rd Party apps to flourish. There is ZERO need for Apple to make an app like this. Ridiculous responses on here
[doublepost=1465327128][/doublepost]
Blah blah blah...

NO NO NO! and... NO!
Being able to share Live Photos with everyone else as GIFs or videos is a very basic function, so basic that it's badly needed. Are you kidding me? The fact that Live Photos (which is a neat feature) can't be shared with anyone that doesn't own an iPhone is simply crazy. This app should be part of Photos, not a 3rd party app.
Score: 10 Votes (Like | Disagree)

That's a no brainer app, surprised it took that long and not done by Apple already.

You can't expect Apple to do it's fancy colored watchbands at the same time they're doing something like this.
Score: 9 Votes (Like | Disagree)

yaxomoxay
why this is not Apple's app is mind boggling
Score: 8 Votes (Like | Disagree)
Read All Comments

Tuesday April 7, 2020 4:28 am PDT by Tim Hardwick
Two images shared on social media this morning are currently stoking speculation about possible hardware redesigns coming to the iPhone 12 and the potential introduction of Home screen widgets in iOS 14. Shared by Twitter user Fudge (choco_bit), the images depict a front and rear graphical representation of a smartphone with interface elements on the screen, suggesting it came out of a...
Read Full Article • 108 comments

Monday April 6, 2020 4:38 am PDT by Tim Hardwick
Further references to Apple's upcoming low-cost iPhone have appeared online, one on a Chinese e-commerce website and another on Verizon's smartphone trade-in page. Spotted by tech blog MySmartPrice, Chinese retailer JD.com has published a placeholder for Apple's so-called "iPhone 9" that includes a teaser image of a veiled smartphone, but other than that it lacks any particularly revealing...
Read Full Article • 101 comments

Tuesday April 7, 2020 10:06 am PDT by Juli Clover
Apple today released iOS and iPadOS 13.4.1, minor updates that come two weeks after the release of iOS and iPadOS 13.4, major updates that introduced iCloud Folder Sharing, a new Mail toolbar, trackpad support for the iPad, and more. The iOS and ‌iPadOS‌ 13.4.1 updates are available on all eligible devices over-the-air in the Settings app. To access the updates, go to Settings > General...
Read Full Article • 66 comments

Tuesday April 7, 2020 7:00 am PDT by Eric Slivka
Rumors of Apple-branded over-ear headphones have been circulating for quite some time, while more recent rumors have mentioned an "AirPods Pro Lite" that could also be in the works, and Twitter leaker Jon Prosser's recent foray into Apple rumors provides a bit more detail on what we might able to expect for these products. Current Beats Studio3 Wireless and BeatsX On the over-ear side,...
Read Full Article • 54 comments