Twitter Finally Launches Support for Live Photos, Allowing Them to Be Uploaded as GIFs

Twitter today announced support for Apple's Live Photos, which can now be uploaded to Twitter and shared as GIFs.

Apple first introduced ‌Live Photos‌ in 2015 alongside the iPhone 6s and 6s Plus, though most social networks still do not support the format and do not allow ‌Live Photos‌ to play when uploaded. 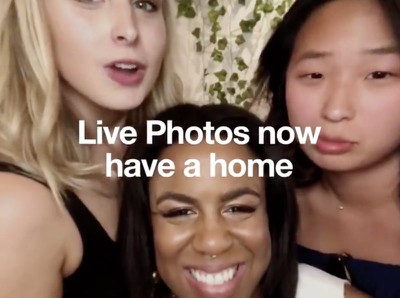 ‌Live Photos‌ are designed to add movement to still photos to bring them to life, similar to the moving photos in the Harry Potter films. When you take a photo on an ‌iPhone‌ with ‌Live Photos‌ enabled, the ‌iPhone‌ captures a few seconds of video before and after the shot to enable the movement.

‌Live Photos‌ are primarily able to be viewed from ‌iPhone‌ to ‌iPhone‌, but there are apps that can convert them into formats supported by social networks like GIFs and videos, which is what Twitter is planning to do.

Uploading a Live Photo to Twitter to share in a tweet will convert the Live Photo into a GIF that displays the animation. Users just need to select a Live Photo in the Twitter app on iOS and then tap the GIF button to upload.

Those who want to share a Live Photo but don't want it to be shared as an animated GIF can just avoid tapping the GIF button, which will cause it to be uploaded as a traditional still photo.

‌Live Photos‌ support is rolling out to the Twitter app today.

It's about time!...said the 3 people who use them.

Live Photos is hugely popular. Most people don't realize they're using them (because once it's turned on, it stays on unit you turn off) but they usually are and once they realize they have 3 seconds of video for all of their photos, they go back through all of them and create boomerangs and fun animations.
Score: 11 Votes (Like | Disagree)

It's about time!...said the 3 people who use them.

This reads as I don’t use Live Photo’s so nobody does.
Score: 8 Votes (Like | Disagree)

Herrpod
It's about time!...said the 3 people who use them.
Score: 5 Votes (Like | Disagree)

Instead of Live Photos support, Twitter should be working on the poor quality of uploaded images due to compression.

They did that in the same update.

now i see it
definitely not a fan of Live Photos. Never seen one that added anything interesting to a photo. I have it turned off
Score: 4 Votes (Like | Disagree)

fmcshan
Instead of Live Photos support, Twitter should be working on the poor quality of uploaded images due to compression.
Score: 3 Votes (Like | Disagree)
Read All Comments